Florals — no matter the season — aren't exactly a groundbreaking concept in fashion. But what about a dressing like an actual flower?

Ushering in a new trend, Zendaya wore a custom white Loewe gown that was half dress, half flower. On Saturday, Zendaya's stylist Law Roach shared a video of the actress modeling the one-of-a-kind garment on Instagram, captioning the footage: "Plucked from a beautiful garden ..... a Lily named @zendaya wearing custom @loewe." The clip showed the Euphoria star posing barefoot in a white subway-tiled shower while wearing the aforementioned slinky gown, which featured a thigh-high slit, as well as a massive lily complete with a green and yellow pistil attached to the bodice.

Looking as ethereal as ever, Zendaya styled her wet hair slicked back, and paired her dewy skin with a soft pink lip.

Zendaya's latest style moment came just days after her historic Emmys win. Earlier this week, the 26-year-old actress officially became the youngest woman to win two Emmys in the same category, and the first Black woman to win an Emmy for lead actress in a drama series twice for her role as Rue Bennett in the HBO series Euphoria.

While accepting her award, Zendaya partly dedicated her speech to those who have been affected by addiction. "My greatest wish for Euphoria was that it could help heal people," she said. "I just want to say thank you to everyone who has shared their story with me. I want you to know that anyone who has loved a Rue or feels like they are a Rue, I want you to know I’m so grateful for your stories and I carry them with me, and I carry them with her. 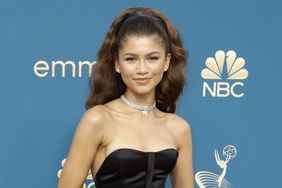 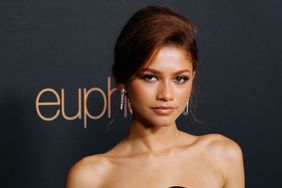