Get to know its designer, Ann Lowe.

Just 10 days before Jacqueline Bouvier became Jackie Kennedy, her wedding dress was destroyed. This is a story about what happened next to get her down the aisle to marry future President (then-Senator) John J. Kennedy in 1953, and about the little-known designer behind the gown, Ann Lowe.

According to the New York Post, 10 out of 15 garments for the nuptials—including the bride's one-of-a-kind look, which had taken two months to make—were destroyed when the Madison Avenue studio they were housed in flooded. Lowe, an African-American designer who was 55 at the time, had been hired to dress Jackie, her mom, and the entire wedding party.

The Presidential Wedding Photos You Never Knew You Needed to See

Somehow, Lowe pulled it all together and designed a wedding dress—with a portrait neckline, bouffant skirt—for the future First Lady that would go down in the history books. But years later, when Lowe died at the age of 82, she was pretty much unknown and basically broke.

Lowe, who was born in Alabama in 1989, inherited her dressmaking sense from her mother and grandmother and went on to study design in New York City. She rose to prominence in the Big Apple—coming to be known as society's "best-kept secret"—but her creative force wasn't compatible with the business side of things. For example, Lowe only charged $500 for Jackie's wedding dress—which would have cost triple from a competitor.

The nation's first high-fashion designer is finally getting the acknowledgement she deserves as some of Lowe's works are being displayed at Washington D.C.'s new National Museum of African American History & Culture, an offshoot of the Smithsonian Institution. Plus, there's going to be an exhibition at the Fashion Institute of Technology in Manhattan this December, and two children's books are currently being created about this historical figure. 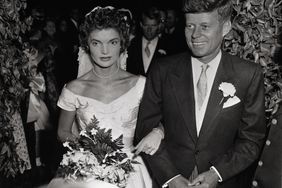