The man, the myth, the legend.

At this point we all know that Donald Trump loves the spotlight, but it seems as though no event is too small for the Republican presidential candidate—including weddings that take place on his over-the-top and lavish country clubs.

In an Esquire piece written by Colin St. John, the author recalls how he and his girlfriend attended a wedding at the Trump National Golf Club in New Jersey (where his daughter Ivanka was married) earlier this month. While his first instinct was to "put Hillary [Clinton] stickers all over that place," it's probably a good thing he didn't follow through because Trump somehow became the man of the hour.

A Look Back at Donald Trump's Three Marriages

After describing the venue as looking as if Trump "had an ego orgasm in each and every room" and noting that "everything I touched bore the mark of Trump," the businessman-turned-politician arrived and joined in on the fun.

"It was as if an actual Minion had materialized at a children's birthday party," St. John wrote, making it impossible for us to ever not think of Trump as the little yellow beings from the Despicable Me franchise that speak in complete gibberish.

By the sound of things, the entire wedding party—including the bride and groom—had ditched the dance floor in the hopes of snagging selfies with Trump.

"He seemed to be the kind of person who can mistake attention for adoration," St. John explained, saying there was lots of laughter—at, not with. "It wasn't like I was watching a presidential candidate; it felt more like Guy Fieri walking through a dining room asking how everyone likes the Donkey Sauce."

In the end, St. John calls the experience "surreal" and notes that he feels kind of bad that the couple's big day will forever be tied to Trump but, on the other hand, quite enjoyed the spectacle of it all—which seems to be how everyone else there felt. 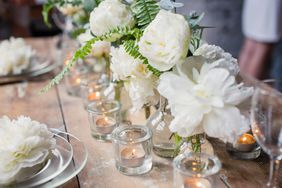