Like most successful fashion houses that rose to the top at the turn of the century, Givenchy's early days included two key elements: a designer namesake and a famous muse that propelled it into the headlines. For Hubert James Taffin de Givenchy and his eponymous brand, that muse was Audrey Hepburn.

While the fashion house was originally known for its simple glamour, different creative directors have given it a gothic edge over the years while still maintaining its notable elegance. A variety of celebrities, from Beyoncé to Meghan Markle, have created iconic moments wearing the brand, and for the last half a century, the influence of the Givenchy name has never waned.

Here's everything you need to know about Givenchy.

Hubert Givenchy was born in 1927 in the French city Beauvais. When he was a teenager, he left home to pursue his passion, design. He studied at École Nationale Supérieure des Beaux-Arts and eventually landed an apprenticeship with Elsa Schiaparelli in 1947. After working his way to an artistic director position at the brand, Givenchy decided to step out on his own in 1952.

In 1953, just shortly after founding his brand, Givenchy met the actress Audrey Hepburn. Instantly they hit it off, leading to a decades-long partnership and friendship. He, of course, made much of the clothing for Hepburn's role in Sabrina, but perhaps the most famous moment of their relationship was when he created the black dress she wore in Breakfast at Tiffany's. The design was inspired by Coco Chanel's little black dresses but had a more modern twist.


Although the original dress was supposed to be shorter, the scene in which Hepburn's character, Holly Golightly, steps out of a cab wearing her black Givenchy dress is easily one of the most recognizable fashion moments of the 20th century.

"His are the only clothes in which I am myself. He is far more than a couturier. He is a creator of personality," Audrey Hepburn reportedly said of the designer, according to Vogue UK.

Later in life, the pair remained close friends, with Hepburn serving as the face of the Givenchy's perfume.

"Audrey was someone who knew perfectly how to dress, and knew perfectly what she should wear. What counted was her eyes, her face, and her silhouette," Givenchy told The New York Times in 2018. "We refined, purified, cleared away for her face. We had to, as I would say, surround Audrey. The results were extraordinary because her face and her style became my style."

In 1988, Givenchy was acquired by Louis Vuitton Moet Hennesy (LVMH) for $45 million. The deal allowed du Givenchy to stay as creative director until he retired in 1995. In the ten years following, famed designers such as Alexander McQueen, John Galliano, and Julien Macdonald all designed for the brand.

In 2005, the Givenchy brand named Italian designer Riccardo Tisci as artistic director. It was an interesting choice because the talented designer was a bit darker in the way he designed. In 2007, he told the New York Times's Cathy Horyn that people tend to think of his work as gothic, but he doesn't feel that way.

"I love romanticism and sensuality, maybe because I come from a family with eight sisters," he explained. "I'm also a person who is very emotional. I like black; I like white. I never like what's in the middle. And the runway is where I try to transmit this."

Throughout his 12 years at the brand, he grew the work into a red carpet staple creating iconic moments with Beyonce, Michelle Obama, Kim Kardashian, Madonna, and more. This also led to success on the revenue side — the designer helped the brand grow by nearly half a billion dollars.

Eventually, Tisci moved on to Burberry in 2018 and designer Claire Waight Keller took over the reins at Givenchy, becoming the first woman to do so. Notably, Waight Keller designed Meghan Markle's wedding dress for her marriage to Prince Harry. The dress was a stark white, long-sleeve gown with a boat neckline.

Speaking to InStyle, Keller said the royal wedding was "a little bit like a workday, because I knew I had to get everything ready in the morning — prepare the dress, make sure it was steamed, make sure everything was perfect and where it needed to be at the right time."

Still, the wedding dress was a hit. The design was as elegant as it was striking and solidified the bond between the brand and Markle. In the months following the wedding, Markle wore dozens of looks designed by Keller.

In 2020, Weight Keller left her role, announcing the news on Instagram.

"After three truly wonderful years, the time has come to close my chapter at Givenchy," she said in her caption. "As the first woman to be the Artistic Director of this legendary Maison, I feel honoured to have been given the opportunity to cherish its legacy and bring it new life."

Matthew Williams takes over in 2020.

In early 2020, Matthew Williams took over Givenchy and is still the brand's Creative Director for both men's and women's collections today. The designer has since brought an edgier look to the brand. In 2021, he took Kendall Jenner to the Met Gala, dressing her in a see-through gown that was embroidered with crystals.

For spring 2023, however, Williams brought some of that femininity back to the brand. In a profile for the New York Times, writer Jessica Testa described this new era of designs — which includes ruffles, hints of pink, and more classic black dresses — as "more svelte and sexy — or 'feminine and sophisticated,' as Mr. Williams said — with less of a tough New Yorker girl vibe and more of a new-to-him Parisian chic." 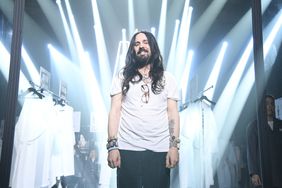 Alessandro Michele Is Out at Gucci 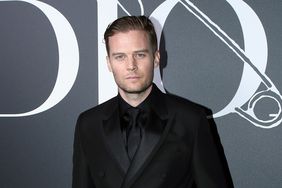