"All they keep asking me is if I’m gonna be your bride."

Weeks after calling out the "weird rumors" that surround her and Joe Alwyn's relationship, Taylor Swift is officially addressing one piece of gossip in particular on her new album Midnights.

On the opening track of her 10th studio album, "Lavender Haze," Swift sings about the engagement buzz that has followed the couple for years. "I'm damned if I do give a damn what people say / the 1950s s— they want from me / I just wanna stay in that lavender haze," read the lyrics. "All they keep asking me is if I'm gonna be your bride / the only kinda girl they see is a one night or a wife."

As for the name "Lavender Haze," Swift previously explained the inspiration for the song title and how she thought it pertained to her current romance with Alwyn. "I happened upon the phrase lavender haze when I was watching Mad Men," she noted on Instagram. "And I looked it up — because I thought it sounded cool — and it turns out that it's a common phrase used in the ‘50s where they would just describe being in love. Like, if you were in the lavender haze, then that meant you were in that all-encompassing love glow. And I thought that was really beautiful."

She continued, "I guess, theoretically, when you're in the lavender haze, you'll do anything to stay there and not let people bring you down off that cloud. And I think a lot of people have to deal with this now, not just like 'public figures,' because we live in the era of social media. And if the world finds out that you're in love with somebody, they're going to weigh in on it. Like my relationship for six years, we've had to dodge weird rumors, tabloid stuff and we just ignore it."

Other songs on Midnights — including "Snow on the Beach," "Sweet Nothing," and "Mastermind" — also offer a peek inside Swift and Alwyn's ultra-private relationship and the early days of their love story.

The bombshells didn't stop there, though. Just three hours after dropping Midnights, Swift revealed that she had a "special very chaotic surprise" for fans — seven bonus songs, which will be available under Midnights (3am Edition). The new tracks are listed as "The Great War," "Bigger Than the Whole Sky," "Paris," "High Infidelity," "Glitch," "Would've, Could've, Should've," and "Dear Reader." 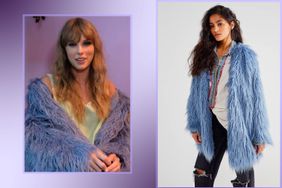