From Sister Act II to Abbott Elementary, the Emmy winner is not slowing down — except when she’s taking it all in.

With an enviable career that spans more than 40 years — and skin that doesn't look a day over 30 — Sheryl Lee Ralph, 65, has done it all, and as she said in her Emmys Acceptance Speech (and song!): She always believed she could.

Having made her mark in 1977's A Piece of the Action as Barbara Stanley, alongside the likes of veteran actor Sidney Poitier, Ralph went on to star on Broadway with a career-defining performance (and a Best Lead Actress Tony nom) as the Deena Jones in 1981's original Dreamgirls, a role later revived by Diana Ross, as well as Queen Bey herself, Beyoncé Giselle Knowles.

Many viewers these days remember Ralph as Florence Watson, the stern (and fashionable) mother from 1993's Sister Act II: Back in the Habit, who dissuades her daughter, a young, talented, and troubled Ms. Lauryn Hill, from a life on stage as a singer who would only end up "singing her shoulda, coulda, wouldas" on a street corner. They may also recall her role as tough, but fair stepmother Dee Mitchell in the 1996 sitcom Moesha, of which singer Brandy plays the titular role.

The Best Beauty Looks From The 2022 Emmy Awards Red Carpet

But now, with Abbott Elementary, the ABC comedy for which she earned her Supporting Actress Emmy win, her fame has reached new heights and a new audience. Before the statue was in her hands, I was able to catch up with Ralph on a ride home from the studio to ask what this spectacular moment — still hitting milestones so far into her career — feels like and where she hopes it may take her.

"I love the fact that people talk about it with their friends ... that they can't wait to tell me what it is they think of it [the show] when they see me out," she says of the way viewers have responded to the series. "Oh my god, and they just embrace you with just such love and joy ... when was the last time there was a show like this for people? Or maybe it's this time ... coming out of COVID ... it is the biggest blessing to me and I am loving it. I really am," she said. While the show may be a blessing to her, it's also a blessing to viewers, as evidenced by the finale's massive ratings. It also pulled in Emmy wins for Quinta Brunson's writing (she also was nominated in the Lead Actress category) and casting, which is hard to argue with.

On Abbott Elementary, Ralph plays Barbara Howard, a quick-witted, no-nonsense kindergarten teacher with a passion for gardening and an aversion to change. She has quickly become America's favorite teacher. While the Barbaras that Ralph has played have also played big roles in her life (both essentially clearing a path for a pivotal moment in her career), she says, "Of course, there's a little Barbara Howard in me, how could there not be? I'm surrounded by educators, teachers, and lifelong learners, they're all in and around my family."

But that may be where the comparison stops. Barbara is very tightly wound, buttoned-up, and try as she may, technologically inept, and we still love her for it. Anyone with social media has seen Ralph's bold style, from the red carpet to her TikTok and Instagram accounts — and though there were a few technical difficulties on our call, Ralph, as always, made it work.

I truly believe in the Holy Impossible. And I'm just ready to bring the impossible to light.

Since she's already so accomplished, I ask her what's next. Her face lights up, the signature dimples abound, and she replies, "I am looking forward to producing some wonderful material, whether it's on stage or on the screen, I want to bring forward some of those stories that have not been told before ... there was a time when there was no interest in stories that had to do with people of color, Black people ... and I would love to give life to some of those stories, because I truly believe in the Holy Impossible. And I'm just ready to bring the impossible to light."

After a few laughs and anecdotes, I ask about the inspiration for her style, Ralph (whose stylist is her fashion-forward digital creator daughter, Ivy-Victoria Maurice) says, "My daughter understands my style, and we work well together. She knows that I can flip between drag queen and classic Americana, and find comfort in both those things," and her virtuosity, her comfort in the commanding of that spectrum may be what makes her such a prodigious, dynamic actress. "Every now and then," she continues, "she does have to say, 'Mommy, let's rethink this.'"

Whatever the part may be, Ralph is ready to dive right in. She has perfected the dichotomy of roles from gorgeous diva — which is not a dirty word — and the heart-forward matriarchal figure who, when necessary, provides tough but unconditional love, and talks some sense into those around her.

She speaks about creator, writer, and co-star Quinta Brunson affectionately, and tells me she originally attempted to persuade Brunson to allow her to audition for the role of aloof, audacious, and irreverent Principal Ava (expertly played by the hilarious Janelle James, who was also nominated for the Supporting Actress Emmy) as a way of going into something new and unexpected. Instead, she says, "Quinta had her mind made up. She said, 'We need a queen for this role and you are that queen!' So, if people see me as queenly, stately, I can be that woman. Why not?" (Remember: Ralph also plays the role of President Kelly Wade on Freeform's Motherland: Fort Salem.) And she definitely is queenly.

As we wrap up our chat, Ralph spots something in the distance, and gasps. It's a large Abbott Elementary FYC (For Your Consideration) billboard for the Emmys. Her smile widens and I can feel the warmth emanating through the phone. It was a sign, and we both knew it. 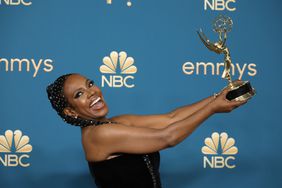 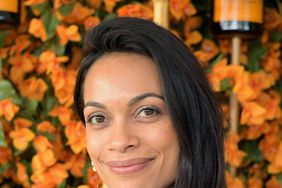