It's the most wonderful time of the year — sequins are now socially acceptable to wear to any function (although, we deem them appropriate year round!). What does this mean, exactly? Celebrities are breaking out their most sparkly looks — from Zoey Deutch's bedazzled mini to Allison Janney's sheer shimmering dress — and now Rihanna has joined the sequin chat, making the fad a solidified trend.

On Thursday night, the businesswoman attended her boyfriend A$AP Rocky's performance at a Miami nightclub while wearing a disco ball set consisting of a button-down shirt, baggy trousers, and a matching bra top. But the shimmering three-piece wasn't the only bling in her outfit; she also accessorized with an icy choker, a black handbag with rhinestone embellishments, and a matching belt. She finished off the look with black sunnies at night — a staple for the superstar — and silver strappy heels. Her long hair was worn in curls and parted down the middle, and she chose a brown glossy lip and a bronzy complexion for glam.

The trip to Miami comes on the heels of the couple's vacation in Barbados. In images obtained by GQ, Rih wore a red micro-minidress with several midsection cutouts that she accessorized with PVC heels and a retro-looking Gucci baguette bag.

The two seem to be enjoying their life as new parents. After welcoming their son in May of this year, a source told Us Weekly that they are "open to more kids." "Having this family together has brought them so much closer, they are more loved up now than ever," the insider said adding that "they love being parents." 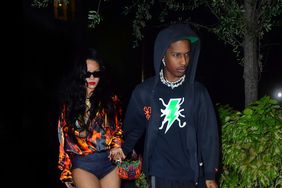 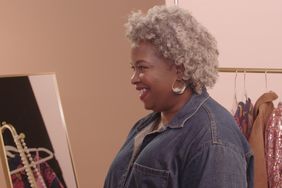 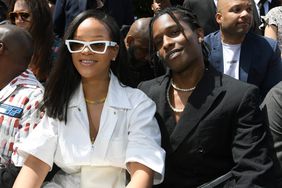