The Most Important TV Show Takeaways This Week

Do you love watching TV as much as we do? Then you're going to love reading our TV takeaways, as we recap and ask the big questions about the best shows on air today—and considering we live in the golden age of television, we have a lot to cover.

From dramas like HBO's new sci-fi hit, Westworld, and NBC's heartwrenching This Is Us to our favorite musical-comedy Crazy Ex Girlfriend and those trash-talking Gallaghers on Shameless, expect to see all of your favorite characters pop up in our discussions.

Scroll down to take a look at what we thought were the best moment on television this week and sound off on the comment section to add your own two cents. Should Fiona be pawning off her big sister duties onto Lip? Will Petra ever be saved from her crazy twin sister? Do Rebecca and Josh have the potential to be a forever couple? Weigh in below!

VIDEO: Hotels From Your Fave TV Shows You Can Visit In Real Life

Debbie is officially under child service's investigation and we officially stopped caring about her. Sorry Debs, you did this to yourself.

TOO. MUCH. FRANK. We're beyond done with the "new Gallaghers" storyline—instead, can we please get started on the Dermot Mulroney comeback tour?

After last week's heartbreaking revelation (RIP Jack), This Is Us is ready to bleed the series' sentiment quota dry—and without our weekly Parenthood fix, we're honestly so on board. We could listen to Kevin reminisce about his dad all day…

After a rapid-fire premiere season, FX's Atlanta went out with a bang in its heartwarming finale—Earn brought a smile to our faces when he played the role of family man at home with Vanessa and Lottie. The final scene left us with a pretty bitter takeaway though: Earn sleeps in a storage unit—though honestly, as a New Yorker, it's something to consider.

Dr. Ford comes face to face with The Man in Black. Do they recognize each other? We can't tell for sure, and it's killing us.

Just when we'd lost all hope of a Grebecca reunion, a newly sober Greg reignited the flame with his latest admission: he loves Rebecca, too! All of which brings Season 1's love triangle officially back in play. 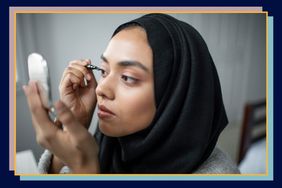 A 5-Minute Makeup Routine For the Non-TikTok Generation