The Handmaids Are Getting New Clothes This Season

Can life get even more terrible for the women on this show? The lead costume designer says yes.

Gilead is heading to war in The Handmaid’s Tale season 3, yet another dark turn in the dystopian Hulu series that explores a world in which women are subjugated. The show’s costumes have become iconic in pop culture, with protesters fighting for women’s rights showing up in the red cloak and white wings of the handmaids, most recently in Alabama and Georgia after the states passed extraordinarily restrictive abortion bans. The new season, out June 5, sees June (Elisabeth Moss), our title handmaid, and Serena (Yvonne Strahovski), the wife of a powerful commander, each step into new leadership roles as the show delves further into the inner workings of both the oppressors and and the resistance. This season, we’ll see both major and subtle costume changes that reflect the shifting tides in Gilead.

Natalie Bronfman is the lead costume designer on the show for season 3, taking over from Ane Crabtree. Bronfman started on the show in season one as a costume supervisor and assistant. In the beginning, she spent her time sourcing and hand-dyeing fabrics, and generally “making the ship run smoothly,” as Bronfman puts it. “I was there from the initial concept of what she [Crabtree] had put in place from Margaret Atwood’s book, so I had a very good handle on how to maintain the world of Gilead,” says Bronfman. InStyle spoke with Bronfman about how she incorporated each character’s evolution, as well as the burgeoning resistance building in the show, into the costume designs.

One of the most notable costume changes is Serena’s. Season two ends with Serena and June making the significant decision to give away their baby girl, Nichole, in order to give her a better life. Serena takes the fallout from this particularly hard, and she ultimately has to decide whether she wants to hide inside her grief, or make active choices for her life. What happens with Nichole becomes Serena’s decision, and what she decides sways the course of the entire season. Bronfman says that Serena’s new determination manifests in the silhouette of her clothing.

“Her shapes have become closer to her body,” Bronfman says. “She’s become a bit more armored…it came a little bit from the military, because in the military you have straighter shoulders, and things are a little bit more shaped and tailored.”

The military aesthetic is also present across a lot of the costume design in season 3. “Everyone in their own little way, to me, anyway, seemed like they’re ready to do battle in some shape or form,” Bronfman says. “Whether it’s mental battle with themselves, to have the strength to go forward, or to actually do physical battle.”

One way Bronfman says this battle is symbolized is in Gilead’s famous color scheme, which gets some new dimensions this season. About scarlet, the color covering everything relating to the handmaids, Bronfman says, “Moving away from it just being about lifeblood and being able to be fertile, the other side of the coin is anger, it’s power and it’s courage, so you’ve got the yin and the yang of that color coming forward.”

Serena’s mother, Pamela (Laila Robins), joins the show this season, and she’s a widow — a new female role which necessitates a new color. Bronfman chose one with an even more explicitly military message. It’s a “dark mulberry purple,” says Bronfman. “The handmaids are an army that we see in red, so I sort of picked the purple because it’s something you give somebody who is a wounded soldier, and I almost want to say that the women are soldiers, all of them, whether they’re wives or handmaids.”

What Would Women Wear In a Dystopian Society? The Cast of The Handmaid’s Tale Reflects

Of course, there is the literal military this season. We finally see Gilead’s army, which is fighting for more territory. Bronfman drew from multiple armies in history to create their uniforms, particularly from fascist leaders of World War II, citing Benito Mussolini and Francisco Franco. “There are elements from all of those armies and different time periods that brought the austerity. I think the biggest thing from the fascists was the color — they’re all in black.”

The striking uniforms made for an unnerving visual on set. “It’s quite eerie because when we filmed it, they’re all very, very young boys. And even other people on set, other men, said that was quite eerie to see,” says Bronfman.

In addition to the army uniforms, there are new handmaid uniforms, which we see in season 3 when the Waterfords visit DC. DC, as it was with the United States, is the capital of Gilead, which means that the rules there are a lot more strict, and so the handmaid uniforms get more severe as well. “We went into Gilead a little deeper, and there were other costumes and tribal uniforms, if you want to call it that, that I created in order to illustrate this other side of Gilead that was a bit more pious,” said Bronfman.

The handmaids in the capital have costumes that come higher up on the neck, and are forced to wear veils that completely cover their mouths. The message is clear – handmaids should be seen and not heard, which is expressed even more literally with a pair of metal rings that pierce the handmaids’ lips together, preventing them from speaking. June is horrified to see what handmaids in the capital go through, and even Aunt Lydia (Ann Dowd) is startled. “The only real thing that was ever exposed on the handmaids was the décolletage, and that, actually, in itself can be a very sensual part of a woman’s body, so to keep in theme with the handmaids’ uniform, there was an addition [this season] that covered the only last thing that was exposed,” Bronfman explains.

As with any war, there are refugees, and Luke (O-T Fagbenle), Moira (Samira Wiley), and now Emily (Alexis Bledel), over in Canada feel the full weight of that status. Bronfman says that this impacted their wardrobes in that the characters are not usually “very style-y,” and that she tried to keep their clothing very sensible. Luke, especially, also has the added burden of being in “emotional turmoil” this season as he finds out that June stayed in Gilead. “I tried to keep [Luke’s clothes] very somber, a lot in earth tones,” says Bronfman. Emily, at least, gets a little bit of the person back that she was before Gilead. “I tried to bring back her professorship in color palettes and her styling, once she gets a little more established in Canada, but she is also, very much so, in turmoil,” says Bronfman.

One of the characters at the top of the power chain this season is Commander Lawrence (Bradley Whitford), a strange man who may actually have an ounce of humanity in him, or may just be one of the most brutal characters on the show. He’s also powerful enough that he can sort of wear whatever he wants, and no one will say anything to him. “There’s a creative sensibility that he has that others don’t seem to be bothered with…Even though he’s an architect of Gilead, he’s not very interested in the party line,” says Bronfman. “I bring out his character through his vests, and the fact that he will not wear a tie, and there’s actually one scene where he’ll only put on the commander jacket with the roping at this impromptu meeting, but he can’t be bothered to change into the rest of it, so he’s sort of saying, ‘well, that’s not really me.’”

Commander Lawrence’s relationship with his wife (Julie Dretzin) is one clearly born of love, but she’s traumatized by the things he’s done in Gilead’s name. “I try to bring that out in her costuming, often bringing in shapes and necklines and dresses that are throwbacks to times that once were – the loving couple that they once were, and the freer times — but we often have things on her that cover her, such as shawls. In her mannerisms, she’s got a lot of things that she just holds herself in, and shielding herself from what’s going on around her,” explains Bronfman.

The tagline for season 3 is “blessed be the fight,” which Bronfman has expressed in every character’s costume. Everyone is a soldier, and the way they’re dressed denotes their rank and power. The commanders get to wear an array of suits, but the women in their uniforms, the handmaids in red, the wives in teal, and the Marthas in light green, each make up an army. No one on this show has more to fight for than the women, and they’re ready to go on the offensive. Gilead is battling outside forces this season, but it’s the women on the inside who pose the greatest threat. There's no telling how this will play out, but at least we know they'll be dressed for the fight. 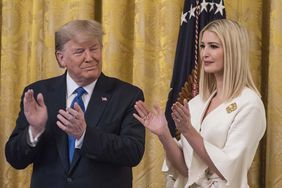 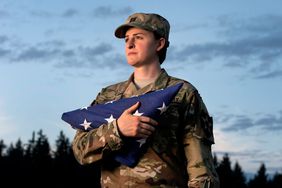