“The Marcia Clark thing changed everything.”

Too often do badass women quiet their pride for the sake of other's or in fear of coming off pompous — But Sarah Paulson is done doing that, and you should probably heed her advice.

On this week's episode of Ladies First with Laura Brown, the American Horror Story actress explained to InStyle's editor in chief Laura Brown the stigma that she, and other women, face when expressing pride or confidence in themselves and their accomplishments.

"Confidence and ambition when spoken about men is heralded as an attribute you want to foster, but in women it can be seen as such an unattractive quality that's thought of only pejoratively," she said.

But the Impeachment: American Crime Story actress is ready to put aside those asinine ideas and actually be proud of herself and her success — and she wants other women to follow suit.

"Some of this is how we've been raised. It's a cultural story that we've all subscribed to, that a lot of our parents subscribed to," she explained. "So when you start to challenge that thought, you do have that very thought right behind it like, 'Oh, that's too egoic to think I'm proud of what I did.' I would hope that there could be some way of shape-shifting this idea of pride and accomplishment simply by [saying] 'I've been doing this thing for almost two years, it's done now! I'm proud! I accomplished something it's over.'"

Perhaps part of Paulson's courage to express her pride comes from her lack of "giving a damn" about what other people think. In fact there's only a select few people whose opinions matter to her: and that starts with herself — and her partner, actress Holland Taylor.

The exception to that rule? After the release of Impeachment: American Crime Story, in which Paulson played disgraced White House Secretary Linda Tripp, the actress was really nervous to learn what Alison Tripp, Linda's daughter, thought of Paulson's portrayal of her mother.

"I had been sort of living in fear that this was not going to go well with her family. But Alison was so sweet and said that she was going to show it to her children and that she wished her mother could see it," she said. "I thought, 'Well, this is all that matters to me.' Now, granted, she has only seen one episode, [so] she may see the rest of the episodes and be like, well, nevermind," Paulson joked.

But despite being nervous about Alison's opinion, Paulson knew that she had done justice to the former secretary and former friend of Monica Lewinsky. She recalled her preparation for the role, from a movement coach to roughly two years of research, following a production halt in early 2020 due to the Covid-19 pandemic.

"There were so much video of Linda leaving her home and coming back into her home because the paparazzi were camped there," she explained. "You could see her walk and try to dodge people, and she had this kind of collapsed chest. So being an actress, I was like, 'Well, it's probably because her heart is broken. For me as an actor, it was probably the first time in my working life where there was kind of an immersion that happened from the outside in. That made it really hard to say goodbye to when we were done, which hasn't even been that long."

Zendaya Says She and Tom Holland Are Both Perfectionists

While she felt good about her work in this role, there is one project that she feels changed her life and attributes her latest successes to. Listen to podcast to find out what it is, why she worried it would be the "joke of the Western world," and who snores the most in her household according to her very weird sleep app. 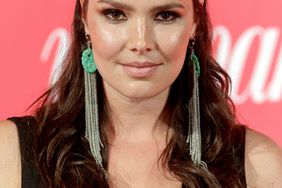