Bless your timeline with these Indigenous designers, activists, and influencers — and we're not just talking about during Native American Heritage month.

It's officially November, which means it's that time of year when we drink our coffee out of red cups, eat turkey, and celebrate the myth of Thanksgiving. And because of the latter, we mustn't forget that November is Native American Heritage Month.

Native peoples and culture should be celebrated every day, but since this is the month that celebrates us nationally and also calls for educating, I want to take this opportunity to highlight some Native women in the fashion space, beautyphiles, creatives, educators, and really, just badass Native women the world should be following. These women (queer, non-binary femmes, Two Spirits, included) inspire me on so many different levels. I follow them religiously as I look to them for lifestyle tips, tricks, advice and honestly just making sure my feeds stay representative of the cultures I wish more people honored, remembered, and paid attention to all year long.

I learn so much from these fierce Indigenous sisters, I know you will, too. These sisters will point you to Indigenous fashion and beauty brands you won't be able to get enough of — my apologies to your bank accounts in advance. And when November rolls back around again, they'll be a great source for an important and accurate history lesson about the founding of this country. They'll also uplift other Native peoples, business, and accounts you should be following and supporting. Here's to celebrating Native women this month, every month, and every day. Go ahead and bless your feed with some of my faves, below.

Bethany Yellowtail is Northern Cheyenne and Crow from Crow Nation in Montana, and the founder of fashion brand B.Yellowtail. She is a powerhouse fashion designer making waves in the fashion industry after sharing her work in Indian Country for the past six years. I've been following Bethany since she created "resistance wear" for water protectors at Standing Rock in 2016, and the Woman Warrior Scarf ($145) she designed for Native women marching on Washington at the inaugural Women's March in 2017. She designs with purpose and intention to honor her culture and the patterns passed down from her ancestors. Her brand is my go-to Instagram account and website for Native-owned fashion. She just dropped a new fall collection in collaboration with Faherty Brand shown in the image above, but follow her to see more.

Cece Meadows is Yaqui and Comanche, and the founder of makeup brand Prados Beauty. I started following Cece in 2019 when she launched her makeup line and began selling her products online. I'm obsessed with Prados Beauty's IG account and the way Cece pairs poppy makeup with Native jewelry and accessories. Her entire makeup line is reflective of the vibrant colors of Native American regalia, stones, and patterns, and they look good on my brown Native skin tone. Cece's brand is an expression of Native joy and excellence. You can find Prados Beauty products in stores at JCPenny or you can check it out online.

Jana Schmieding is Cheyenne River Lakota from Oregon, and a rising TV actress, comedian, and writer. Jana made her acting debut on the Peacock TV series Rutherford Falls, playing Reagan Wells and co-starring opposite Ed Helms. Her Native humor shines through her role and her writing, as she also serves as a staff writer on the show. She is praised by both the Native and non-Native communities for bringing to life, so brilliantly, a strong, proud, funny, intelligent, beautiful and fashionable Native woman. I follow her on social media for a good dose of satirical humor as well as fashion and beauty recommendations.

Kinsale Hueston is Diné from Southern California, and a brilliant writer and poet. She is a college student at Yale University, where she founded an art magazine called Changing Womxn Collective by and for BIPOC women and non-binary people. Her social media following has grown immensely over the past several years for her keen sense of style. She quickly became known as the Native fashion girl and every Native fashion designer's dream model. Though she's much younger than I am, she continually inspires my style. Also, if you ever get a chance to see her perform, you don't want to miss her reciting the words she strings together so beautifully.

Tia Wood is Cree and Salish from Vancouver, BC, Canada. She is a 22-year-old singer, powwow dancer, and fashion influencer. She caught my attention on TikTok, where she posts "duets" with pop singers but "indigenizes" their songs by adding powwow hooks throughout the duet. She brings a soulful, R&B tone to Native music that makes her fresh and modern take stand out. Her social media is filled with fashion and beauty tips which also stand out thanks to her strongly Native POV. She even revealed, recently, how she mixes eye shadow colors to get her signature lipstick shade. I'm always watching out for a new post for tips or to hear her beautiful voice.

Lady Shug is Diné from the Navajo Nation. She is a beautiful non-binary drag queen, who is part of HBO's We're Here family. She was featured in season one of We're Here in an episode that focused on the Native drag community in the Navajo Nation. When you visit Lady Shug's social media, you'll not only find fierce makeup looks but you'll also come across important education on the Native LGBTQIA+ and Two Spirit communities, and how to support our gender expansive relatives. She also hosts "Late Nite Kiki with Lady Shug," a weekly IG Live, where you'll find her in conversation with star guests like Jana Schmieding (Rutherford Falls) and Dustin Milligan (Schitt's Creek).

Quannah Chasinghorse is Hän Gwich'in and Sicangu-Oglala Lakota from Alaska. She is a fashion model, climate warrior and land protector. She recently shot to stardom after she graced the 2021 Met Gala beige carpet, draped in Diné (Navajo) turquoise from her aunt (former Miss Navajo Nation) who flew the jewelry out to NYC herself. Simply put, she was an Indigenous QUEEN that night and brought all of Indian Country to tears of joy. She walked for multiple fashion shows this season, and now joins Chanel's Spring-Summer show and campaign, which is a first for her and all Native American models. Indian Country was quick to nickname her "Queen Quannah," a fitting title as she continues to rise up and make her community proud.

Devery Jabobs is Mohawk from Kahnawake, Quebec, Canada, and a queer actress on the rise. She began acting in the late-2000s and has been on a recent ascent for her role as Elora Danan in FX's successful Hulu TV series Reservation Dogs. (I'm such a fan that I dressed up as Elora for Halloween this year.) In this role, Devery is part of a groundbreaking television series that has a primarily Native cast and crew, and was created and written by an all Indigneous team. I enjoy following her on social media because she makes bold fashion choices that are colorful and casual, with a touch of rocker chic, though she pulls off elegant and classic looks just as well. And as an advocate for Indigenous issues, she keeps things educational and informative for all of her followers.

Naiomi Glasses is Diné from the Navajo Nation. She is a traditional Diné rug weaver, textile artist, model, and skater. She was featured in Sephora's "Stories of Belonging" campaign in August 2020, which told her story of her upbringing in the Navajo Nation, learning traditional Diné weaving passed down from generations before her, and overcoming bullying for her cleft lip and palate. She shared how makeup made her feel beautiful and confident during that period of her life, and has since become a prominent beauty influencer and role model in the Native American community. She also became viral on TikTok for skateboarding in her traditional Diné garb and woven handbags. Naiomi is proud of her upbringing, culture, and stands proudly in her power and newfound confidence. I love following her journey on social media — she emanates beauty, confidence, and inspiration.

U.S. Secretary of the Interior Deb Haaland on Being the First — and the Future

Goldie Tom is Diné from the Navajo Nation. She is a hair stylist and makeup artist, who travels across the country with her craft. You'll find her at Native fashion shows, New York and Paris fashion weeks, and really, anywhere there is fashion and beauty. I met Goldie in 2014 when she was the makeup artist at an event I co-created, and then got to know her more when I "modeled" (I use quotes because I was not a model) for local Native fashion designers at fashion shows around the Navajo Nation, where I had the great honor of sitting in her chair as she perfected her craft on me and so many actual Native models. Her career as a hair stylist and makeup artist has grown exponentially since 2014 and it's pure joy to follow her adventures on social media, as she shares before and after looks, and candid humor about her interactions throughout her travels. Her stories will have you laughing out loud and her posts will give you hot tips on hair styling and makeup tricks alike. 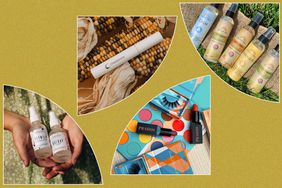 10 Indigenous-Owned Beauty Brands to Keep on Your Radar 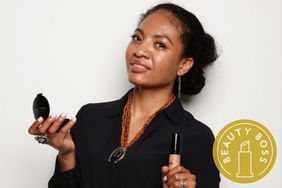