The Best TV Shows of the Year Have One Thing in Common: Messy Main Characters

If you love watching someone destroy their own life, you're far from alone.

Raise your hand if you swooned over a hot priest this year, or went online to purchase the exact same sexy jumpsuit Phoebe Waller-Bridge wore as Fleabag’s title character while seducing a man of God.

Both season 2 of Fleabag and the first seasons of Russian Doll and Dead to Me showed women confronting a tendency toward messiness, while also embracing the tumult of it. And this is just a sampling of the many shows that have shifted from the antihero formula of Tony Soprano, Vic Mackey, and Walter White, to main characters who lack a definitive line marking “this is the portion of their life where this person is good, and this is where the evil begins.” (Think Tony at home, versus the whole of his professional life.)

Television in 2019 is all about across-the-board chaotic characters, who could be exacerbated versions of a character we’ve known or personally embodied. Someone like Nadia (Natasha Lyonne) in Russian Doll who has survived 36 years of bad decisions because she always masked pain, hurt, and insecurity with a perfectly timed quip implying she’s just fine, thank you, and simply living by her own rules. Her unrepentant failing is reminiscent of popular refrains like “you go girl” or “yasss queen,” which are now deployed equally as a reaction to someone getting a big promotion — or getting wasted on a Tuesday and yelling at their ex. No one would claim celebration is the correct response for destructive behavior, but here we are.

The draw of these shows — specifically for millennials — is clear considering the generation is dealing with depression, craving job security, and stymied by the debt of their college loans and credit cards, while constantly being mocked for its failings in all of these areas. The chaos of Fleabag and Russian Doll exist in synergy with the real life mess many currently contend with. A show like Succession, where disorder reigns supreme and not one character is remotely likeable, provides a balm in the form schadenfreude. Every Sunday night, we get to see bad things happening to obscenely wealthy, terrible people who — bonus — make a very close stand-in for the ones we see in the news facing no repercussions for similarly egregious behavior.

On Fleabag, we see the protagonist sleep with people she doesn’t want to, end up bloody-nosed at an important family dinner after punching her brother-in-law, steal from her father’s fiancee, all on the path to figuring out her desires, and herself. In a church confessional she enters mainly to try to hook up with the priest, the character ends up confessing, truthfully, that she’s scared, and just wants help doing better. This revelation, handily, comes after she demonstrates an acute need for help in this area.

Everyone In Hollywood Wants to Work With Phoebe Waller-Bridge

Russian Doll was another show dealing with questions of “how do I fix my life” this year, with a character examining minute-by-minute decisions in an attempt to make better ones. Instead of breaking the fourth wall, as in Fleabag, Natasha Lyonne’s Nadia simply keeps dying in grotesque fashions and then reliving her 36th birthday (badly). One version involves casual impersonal sex with a guy she doesn’t even like or respect. In another, she’ll have sex with a guy she actually does like and respect while defaulting to cruelty afterward rather than risk being vulnerable with him. Even when sex isn’t in the equation, she avoids examining herself or pursuing real intimacy — and she keeps dying because of it.

“There may be some aspect of vicarious risk-taking, where we can feel that a character is ‘not us’ and we can feel slightly better-off about our own situations when others are worse off,” explains Dr. Jessica Gold, assistant professor of psychiatry at Washington University, and occasional InStyle contributor covering the connection between pop culture and mental health.

Over on Dead To Me, Linda Cardellini’s character attempts to cancel out the worst thing she’s ever done by making the even more catastrophic decision of befriending the one person who could get her thrown in prison for it. And Christina Applegate battles through her grief and depression by making choices that will assuredly lead to more emotional pain along with reckless (but satisfying) destruction of private property in order to avoid facing the true source of her anger and sadness.

Dr. Gold also contends that the underdog phenomenon might explain the appeal of watching characters hurtle down a path of self-destruction, nevertheless hopeful for some kind of resolution in the end. Despite everything we know to anticipate (Sandra Oh's Eve won’t catch Villanelle on Killing Eve, but probably will destroy her career; Fleabag will get her heart broken; Nadia will keep making smartass comments instead of owning her feelings), we want to believe everything will be okay.

“A few studies show that we get more joy out of unexpected successes than expected ones (rags to riches stories for example), and less pain from expected failures than unexpected ones,” Dr. Gold says. “With characters like Eve, we know they will fail, but you pull for them and hope that maybe, just maybe, things will finally work out. Maybe we all feel like the underdog right now, so rooting for those kinds of characters is somehow rooting for ourselves.”

Whether or not they’re looking for personal payoff, like the Eve Polastri of their own lives, viewers (and Emmy voters alike) are definitely tuning in. Succession received series high ratings for its season 2 premiere (up 32% from season 1) with 1.2 million people watching. Similarly on Rotten Tomatoes, Fleabag, Russian Doll and Dead To Me all have between the high 80s and mid 90s in average audience scores, with Netflix reporting that 30 million people watched Dead To Me. All of these shows have dominated headlines and best of lists, with their next seasons already ordered.

Critical acclaim is quickly following: Russian Doll garnered 13 Emmy nominations this year and Fleabag picked up 11. Killing Eve collected nine nominations, and while Succession and Dead To Me have fewer nominations, they appear in highly coveted categories, Outstanding Drama Series and Outstanding Lead Actress in a Comedy Series, respectively.

And Sunday nights, After every Succession episode airs, someone will undoubtedly tweet a take like “I’m a Kendall but a Shiv rising,” and social media will devolve into a conversation about which no good, very bad Roy family member we most resemble. It's clear people are engaging with these shows, perhaps hopeful that if the characters can sublimate their fictional disasters, we'll find a way out of our own messes, too (or the strength to simply “yas girl” and keep going). In the end of Fleabag, the character says she just wants someone to tell her the right way to live; as viewers, we want to see that someone else doesn’t know. These messy-led shows can minimize the small catastrophes of our own daily lives. Plus, they prepare us for the inevitability that more chaos is always right around the corner — in life, and in season two. 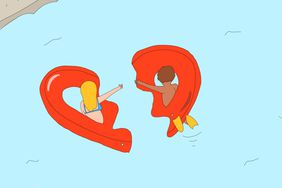