The night after the election, Teresa Shook, a retired attorney in Hawaii, took to Facebook and asked a simple question: What if we march the day after the inauguration? By the time she woke up, 10,000 people had responded.

Fast-forward two and a half months later, the official Women’s March on Washington event page has over 201,000 confirmed attendees—with over 250,000 more interested parties—and has become the largest mass mobilization of activists and protestors to ever occur in the United States on the first day a president is in office. And it’s largely thanks to a group of hardworking, fearless, politically-engaged women.

It’s just past noon at the Women’s March’s temporary headquarters in a shared office space Midtown Manhattan. Signs emblazoned with “RESPECT HUMAN RIGHTS” and “DON’T LET THEM GET AWAY WITH MURDER” line the walls along with portraits of Harry Belafonte and Nelson Mandella, and bronze busts of John F. Kennedy, Abraham Lincoln, and Eleanor Roosevelt sit atop windowsills.

The room is buzzing. Phones are ringing off the hook, doors are swinging open and closed, and the sound of typing is a neverending background soundtrack. Sarah Sophie Flicker, a filmmaker and social activist, is in the midst of crafting a social media post about the principles of nonviolence. She’s here a bit later than usual, she says, because she was up working until midnight. “Most of us are devoting 18 hours a day to this.”

For Flicker and her fellow activists, Tamika Mallory, Carmen Perez, and Linda Sarsour—all of whom have full-time jobs—the day begins with an early morning conference call and ends in the wee hours. Each member of the coalition has her own set of duties: Flicker is responsible for programming and artist outreach; Mallory, Perez, and Sarsour head up partnerships and promote diversity and inclusivity.

“My goal is to ensure that women of color and the most marginalized communities are at the center,” Perez, a Mexican-American from Oxnard, Calif. tells me, then pauses before adding, “This is not an anti-Trump rally. Trump is a reflection of what the country represents right now, but it’s so much larger than him. We’re not marching on Trump; we’re marching on Washington.”

Alyssa Klein, senior editor at OkayAfrica, a website dedicated to African culture, moonlights as social media manager, and is huddled in a corner posting a series of profiles on the organizers of the march, along with a public call for artwork by female-identifying artists in the U.S. to display on the day of. “I want to be clear: We want men to come too,” she says. “Everyone is welcome.”

“It makes us feel so good to have everyone be so supportive,” Flicker says. “This election was a wounding period of time for everyone—but especially for women. I’ve always considered myself a feminist, and if it [feminism] isn’t intersectional, it can’t exist. In this bleak political landscape, working on this march has been the most heartening experience I’ve ever had.”

Moments later, Flicker is pulled into a conversation about an image for the Women’s March Instagram account. Many organizers are heading to Washington the next day to triple-check the route at the intersection of Independence Avenue and Third Street SW near the Capitol. There are a lot of important factors to mull over: porta potties, ADA accessibility, sound projection—all adding up to an estimated $2 million price tag, paid for by donations and grassroots fundraising.

“I know that it’s all worth it,” says Perez, typing on her computer with a telephone held to her left ear. “We owe this to the women of our country.” Adds Flicker: “The march is just the beginning—the drumbeat has to be loud and sustained. Once you start campaigning for change, it just becomes the fabric of your life.” 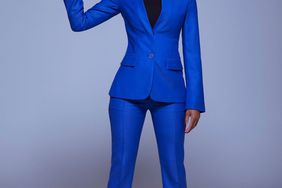 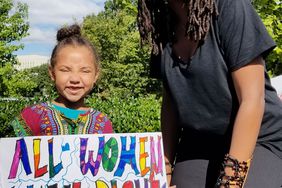 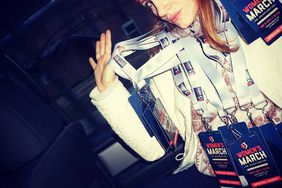 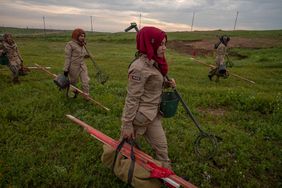