Why Everyone Watching 'You' Is Now Team Love

Yes, Joe is hot, but Love is just so damn relatable.

Now let me preface all this with the caveat that no amount of postpartum hormone spikes justify murdering or kidnapping your friends and neighbors, no matter how sleep-deprived and tired you are. But let me just say: Love Quinn, I see you, I hear you, I understand you.

If you're not familiar with Love (Victoria Pedretti), she's one of the leads on season three of Netflix's hit show You. She is the wife of Joe Goldberg (Penn Badgely), an obsessive compulsive stalker who has a history of kidnapping his love interests and killing their friends and exes. In Love, Joe appears to have met his match, a fellow obsessive who has her own impulsive violent streak. At the end of season two it looked like Joe was going to kill Love in order to escape her obsession with him, until she announced she was pregnant.

Now Joe and Love are trying to make it work as a family of three. They've even moved to a quiet, family-friendly neighborhood, bought the minivan, and embraced suburbia. But new motherhood has hit Love hard. She's tired, wracking up a sleep debt that can likely never be repaid and struggling to maintain her sense of self through the exhaustion.

She's anxious and depressed about her postpartum body, a feeling exacerbated by the group of alpha parents in Madre Linda, their suburban enclave. In one particularly upsetting scene, Sherry Conrad, played perfectly by Shalita Grant, mentions pointedly to Love after a workout class that she, too, struggled with baby weight after her pregnancy. Love appears bewildered, as losing weight hadn't crossed her mind until that point. I'll admit it was a pretty triggering scene for me, still finding my way back into my body a year and a half after giving birth to my second child.

In fact, I could relate to a lot of Love's struggles in new motherhood. She feels guilt about wanting to find a sense of self outside of mothering, away from her baby. She is worried that she's losing her personhood and her ambition. She openly says she's not sure who she is anymore, now that she's a mother. It's a feeling most new moms can instantly connect with. Motherhood is obliterating, it changes your relationship to yourself and to those around you. Babies transform us, but that transformation can be remarkably alienating and isolating.

And Love does feel increasingly alone in this new chapter, as she watches her partner going through the motions, looking detached from the experience of fatherhood. Joe himself is likely going through his own postnatal depression, finding it difficult to connect to the baby and struggling to understand why he isn't taking to parenthood right away. Joe and Love aren't connecting either, both on the parenting front and in the bedroom. Something most new parents can appreciate.

There's a scene in the first episode that encapsulates everything about the push and pull of parenting for the first time, of trying to find your role in the new family unit and navigating each other's fluctuating emotions. Love and Joe come inside and head to the kitchen, baby in the car seat set down gently in the adjoining room. Love looks around dejectedly at the mess in the kitchen, the piles of takeout and dirty dishes and unwashed baby bottles that all parents recognize as the tokens of postpartum life. She immediately goes into guilt-mode, feeling overwhelmed at the prospect of cleaning all this up in her sleep-deprived, overwrought state. She wants to cry, she wants to give up. Joe goes into fix-it mode, offers to take care of it all, tells Love to lie down, but as he reaches for the now crying baby who doesn't want dad, she immediately rejects the offer of help. Only she can manage the baby, she thinks. And the dynamic of hurt, frustration, and rejection solidifies. I've been there. I've felt that, hell I felt it all over again just watching that scene play out.

Penn Badgley Is Not Who You Fans Think He Is

At one point in episode three, Joe, feeling the weight of his new responsibilities and the pressures of parenting, asks himself if "this is really the life I want?" Something most parents have probably asked themselves at some point, in the throes of an epic tantrum or late at night when the exhaustion weighs your body down, and just when you think you can finally give into it and sleep, the baby cries for milk.

You may be centered around a serial killer with a compulsion for stalking women, but in season three it's also managed to portray postpartum anxiety and the overwhelming pressures of new parenthood in an honest, remarkably refreshing way. And while many of Joe and Love's parental fights take place while they're burying bodies together, they've still managed to portray the dynamics of a new family in a deeply relatable way. But of course as I said earlier, sleep loss and diaper blowouts are not an excuse for murder!

Is Sex Addiction Real, or Just an Excuse for Bad Behavior? 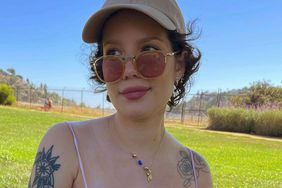 Halsey Is Being Praised for Showing Off Their Postpartum Stretch Marks