With a very off-brand announcement photo.

Fans have been waiting since 2017 for some new music from Lorde (real name Ella Marija Lani Yelich-O'Connor), but the singer appeared to be promising something exciting today with an update to her website. Today, Lorde's site — she hasn't tweeted since 2017 and her Instagram account isn't exactly active — changed to include what could be cover art for a new single, "Solar Power," and the announcement: "Arriving in 2021 … patience is a virtue."

Variety reports that the cheeky photo could be of Lorde herself, though there's no official word on who it could be from the artist or her representatives. Producer Jack Antonoff shared the image on his Instagram Story, which could usher in a new era of ... optimistic, sunny, not-all-black-clothes Lorde?

Last year, she updated fans with some news, saying that she'd been back in the studio. She name-checked Antonoff, who worked on her 2017 album, Melodrama. There hasn't been an update since then, though many fans speculated that she could be releasing something when it was announced that she'd perform at Spain's Primavera Festival in 2022. Her last live show was in 2018, when she embarked on the Melodrama World Tour.

"I started going back to the studio again in December, just for something to do, and to my surprise, good things came out," she wrote. "Happy, playful things. I felt my melodic muscles flexing and strengthening. A thing started to take shape. And then, of course, the world shut down. We're still working away — Jack and I FaceTimed for over an hour this morning going over everything. But it'll take a while longer." 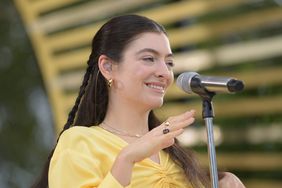