How All the Bad Stuff Going on Strengthened My Faith

Lindsay Dolak
Lindsay Dolak
Lindsay Dolak is a New York-based writer and editor who covers all things weddings, beauty, and fashion. She was an editor for InStyle for two years, where she wrote and edited regular articles for the print magazine and produced e-commerce content for the digital version.
InStyle's editorial guidelines

I used to wear a “What Would Jesus Do” bracelet. The campy woven thing was bright red with the letters W.W.J.D embroidered in white. It remained on my wrist throughout my years at my private Catholic high school. I also wore a silver cross around my neck, went to church every Sunday, prayed morning and night, and felt, for the most part, deeply connected to my faith. Then, I went to college.

For the first few weeks, I kept up with my faith. I felt in touch with God and I turned to religion when I was overwhelmed. But, gradually, my Sundays were overtaken by a seriously increased workload, a part-time job, and, honestly, hangovers. By the end of my four years, religion felt less like a reprieve from stress and anxiety and more of a nagging habit itself. I also struggled, as so many young people do, to connect with the faith outside of the religious institution.

I’ve never felt resentful toward Catholicism or the teachings of the church; I felt disconnected. In my elementary school’s religion classes, we were taught to be like Jesus. That meant to accept everyone regardless of their differences, turn the other cheek, and, above all else, love thy neighbor as thyself. So, later in life, I found myself conflicted with the church’s refusal to acknowledge gay marriage, its condemnation of abortions, and its refusal to accept divorce. It felt archaic to me, and, more than anything, it felt hypocritical. And so, while I would never outright denounce the church or my religion, I didn’t do much to revitalize my faith.

In recent years, I’ve kept the major tenants of my Christian faith in my heart and always identified as a person who believes strongly in God. That connection never suffered. I’ve always known my Christian identity was important to me but I didn’t realize to what extent until the last few months.

Much has been written about the uptick in people's anxiety recently, and I was certainly not immune. Every day, I felt I was confronted with a new catastrophe: Death and destruction in Syria. Terrorism in London. A shooting on the Champs-Élysées. Not to mention the current political rollercoaster. I found the news cycle to be so consuming, depressing, and above all terrifying that I started consciously unplugging.

VIDEO: Too Much Social Media Is Linked to Real-Life Isolation

For a long time, I didn’t know what I could do that would create any real impact or inspire any change. But as I continued on with my days and regularly witnessed people in clear emotional agony or read stories about people terrified of losing their healthcare or being kicked out of the country, it just dawned on me that what the world really needs right now is less negativity and more love. Almost overnight, I started seeing everyone differently, imagining them as my brothers and sisters, just like I had been taught so long ago in religion class. We were all on the same playing field and we all wanted acceptance, forgiveness, and love.

I decided then and there to move through my days with as much positivity as I could muster. I preach forgiveness to my friends, whether they’re fighting with their boyfriends or just pissed off at life. I smile more. I try to give more to the homeless. And I pray a hell of a lot more. Without even really trying, I realigned with my Christian faith and, this time around, the connection feels even stronger. By refusing to carry negativity around with me, by swallowing my pride more often, and by practicing genuine empathy every single day, I feel emotionally lighter. I feel happier. And I feel a bit better equipped to manage the weight of the world ... or at least some of it. And I noticed an amazing result: As I've attempted to inject more love into my life and the lives of those around me, I've noticed more and more people are actually doing the same exact thing.

So, while I lost my W.W.J.D. bracelet long ago, the state of the world serves as a reminder of the necessity of faith all on its own. The reinvigoration of my Christian values–forgiveness, compassion, love–has allowed me to feel genuinely connected to each and every person around me. 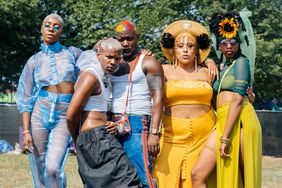