Pretty much any die-hard Gilmore Girls fan could tell you exactly where they were when they learned that the beloved series would be revived on Netflix this fall. And despite years of dreaming that a return to Stars Hollow would one day become reality, many of us were pleasantly surprised by the initial announcement. But for the show's cast, discussions about a revival had been going on for quite some time.

"It's been a long road because these things don't happen in a linear way," Lauren Graham, who plays Lorelai Gilmore, recently said during Netflix's Television Critics Association press day. "We've been talking about it, I feel like, since the day the old show ended, and I think the first step was 'Is there willingness? If we could make it happen, would we?' And from there, I mean, literally until the night before we were filming, I don't think we had everybody. It just doesn't happen in a linear way. So yes, we've been talking about it for so, so, so long—that was part of the relief and joy of actually getting to do it because I think we ended up getting to do it in the perfect way."

And when the cast returned to the set to begin filming the four 90-minute episodes for the reboot series, titled Gilmore Girls: A Year in the Life, they picked up right where they left off. Scroll down to find out four revelations from the stars.

It was "really easy" to get back in the swing of things—especially the show's fast-paced talking.

For Alexis Bledel, who plays Rory Gilmore, the first day back on set was unforgettable. "It was surreal, but at the same time, as if no time had passed at all," she said at the TCA event. "It was exciting to be back and get this chance to revisit something that was really dear to all of us, and that we spent a lot of time on. It was like we never left."

And it wasn't all work right away. "There was definitely time for nostalgia," said Bledel, who quickly got the hang of the show's fast-paced dialogue again. "It's really easy," she said. "You get a script from [creator] Amy [Sherman-Palladino]. The way it's written, it just informs you as to how it's supposed to be said. It's all there on the page."

"I was very emotional and excited," Graham said of her first day back on the set. "I was kind of a mess—I was just too emotional. I had to pull it together to say my long lines." As filming continued, the high energy remained. "The overwhelming feeling was just gratitude," Graham said. "People were happy to be working on the show if they hadn't been there before, and if they had, they were happy to be back." That sense of positivity "helped us get through because this is a challenging show to do," she said. "These are long scenes and long speeches and theatrical language, and that's not what most TV is. So I would say, I had a point about halfway through where I was like, 'I remember you.'"

As for getting back into character, Graham found her return to Lorelai to be totally natural. "It was not difficult," she said. "It was easy, it was joyous, it was fun, it was exhilarating. It was the old show—there was no sense of having to resuscitate something. It was just like it was meant to continue."

The stars noticed minor upgrades to the set—including Luke's Diner.

When Scott Patterson first stepped back into the diner owned by his character Luke Danes, it took the star a minute to re-adjust to his old surroundings, which had been rebuilt for the new series. "The diner seemed bigger, but it wasn't," Patterson said during the TCA panel. "It was more colorful, and the floors were very soft. It was a really padded, nice floor. Very pleasant."

Even the grouchiest Stars Hollow resident, Michel Gerard, was excited to return—or at least the actor who plays him, Yanic Truesdale, was enthusiastic about it. "The first day back on the set: To me, the best way to describe the vibe—it was like a high school reunion," Truesdale recently told InStyle. "It was like meeting people that you've met when you were much, much, much younger, and people that you really love, people that were part of a time in your life that really matters. Because, let's face it—Gilmore Girls changed a lot of our lives, and everyone that was involved, it was an important moment for them. So we were very, very happy to reconnect." 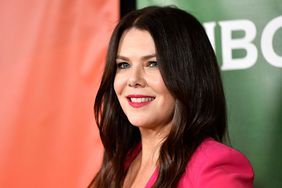