"Doing This Job Feels Like Spinning on a Log in the Water": How the Women of CNN Pull off Their State of the Union Coverage

Behind the scenes with the network's top talent on one of the toughest reporting days of the year.

Just after 9 a.m. on Tuesday, the morning of President Trump's second State of the Union address, more than a dozen reporters gathered outside on the White House driveway to toss questions at his press secretary, Sarah Huckabee Sanders. Among the group were Kaitlan Collins and Abby Phillip, two of CNN's youngest on-air correspondents.

Collins, 26, lands the first question, referring to something Trump had just tweeted seconds before: "Sarah, what does the president mean when he says he'll build a human wall if necessary?"

Collins and Phillip have been up since 6 a.m. monitoring news developments and sitting in hair and makeup, and they'll rotate reporting on- and off-camera for a grueling 12 hours before Trump addresses the nation. They roam the White House press area with unflappable confidence, despite both having taken some headline-making abuse from the president in the past year. Trump banned Collins from a Rose Garden event in July after she asked Russia-related questions he didn't like, and the president verbally attacked Phillip during a White House press conference in November for asking about the investigation against him.

The reporters mostly took the rebukes as a compliment, they tell me in a joint interview outside the White House. "If he gets upset about a question, it's kind of a sign that you're onto something important," Phillip says. "It is sometimes a little intimidating, because he's the president of the United States and he's pointing his finger at you. But you have to just keep trying to get answers out of him."

"It's important not to let it get to you," Collins adds. "If you do, then you reinforce their stereotype that the media is biased and we want to argue with the president, which we don't."

Collins and Phillip are two of about a dozen female anchors and correspondents CNN had stationed around Washington on Tuesday to produce round-the-clock coverage of Trump's address. They describe themselves as a "sisterhood." The older ones mentor the younger ones. The new mothers, of which there are several, share baby clothes and parenting tips. They vent to each other about online harassment — a problem plaguing many female journalists today.

"Every day there's a new tweet about me getting lip injections," laughs Pamela Brown, a senior White House correspondent for CNN, who has a seven-month-old baby at home. "I never got lip injections in my life. You're like, 'don't these people have anything better to do?'"

Back at the network's headquarters, the area where chief political correspondent Dana Bash and chief political analyst Gloria Borger have their offices is known as "estrogen corner." ("Some real and some pharmaceutical," Borger jokes.) The veteran journalists are perched on a gray sofa in Bash's office, which looks something like a millennial feminist's bachelorette pad. Nods to women's empowerment are everywhere: A pink "fight like a girl" pillow on a fuzzy white bench. A framed poster of Wonder Woman. A quote on the wall that says, "Don't let your emotions make you their bitch."

She carries this ethos into her reporting. I ask Bash what's most challenging about covering this presidency, and she doesn't mince words. "What makes me uncomfortable every single time I have to do it is to have to be on the air and say, in some shape or form, 'What the president of the United States just said isn't true,'" says Bash. "When you are being anti-lie or pro-truth, you come across as being anti-Trump or pro-Democrat, and it's a very tough thing for those of us who are just working journalists and still believe in the notion of objectivity."

Borger agrees, adding, "The other thing that's difficult about covering this administration is just the mach speed at which everything changes every day. By Friday, I have a hard time remembering what happened on Monday."

Dealing with these reporting challenges is particularly hard for the women who have babies at home. Anchor Brianna Keilar has her hands full with an eight-month-old son and a two-year-old stepson, and her husband is deployed overseas. "It's really difficult. You're taking on a lot when you're a mom doing this job, and I'm just starting to figure out what kind of support is there for military spouses," she says. "Until about two weeks ago, my baby was only sleeping about two or three hours at a time."

Keilar works long hours, but her schedule is fairly stable because she's an anchor. Over at the Capitol, congressional correspondent Sunlen Serfaty, who has a one-year-old at home, is running through the hallways chasing down Senators. The six-foot blond reporter can spot them like a hawk from a hundred feet away, distinguishing between similar-looking gray-haired white men by only their gait. "Is that Cornyn?" she asks, pointing at the Texas Senator, whose face I can barely make out in the dark basement hallway.

Indeed it was, and Serfaty grabbed Senator John Cornyn for an on-camera interview about the upcoming SOTU, which at that point was a few hours away, and then resumes our conversation. She tells me that she woke up at 5:45 a.m. so she could squeeze in a workout before her long day. "I tell people doing this job feels like being a lumberjack spinning on a log in the water," she says, making the running gesture with two fingers. "You have to just keep going."

About an hour before the 9 p.m. speech, congressmen and guests filed into the House chamber, and CNN switched to live coverage of the event. Bash was in the middle of the action, grabbing rising Democratic star Alexandria Ocasio-Cortez for an on-camera spot. In a studio back at headquarters, CNN hosts Jake Tapper and Wolf Blitzer watched the interview with Kate Bennett, the network's Melania Trump correspondent, waiting to go live and weigh in. Bennett is so comfortable on TV that she was doing dance moves in her chair, making funny faces at me, and trading jokes with Tapper before their panel.

"I'm kind of a dork," Bennett, a former fashion editor, explains to me afterwards. "It's a long night for a lot of people, and this is a high-pressure time. Not that I'm here to be a jokester, but let's remember that we're all human beings."

Of course, the jokes stopped when the show began, and CNN's deep bench of on-air women took their places in various studios to watch and read the speech. A team of producers in the control-room fact-checked Trump's statements in real time, feeding that information to the talent for their post-show analysis. Some of them, by the end of the evening, had worked about 15 hours.

I was struck by the warmth and unpretentiousness of all of these women. "Shine theory," a term coined by journalist Ann Friedman and her podcast co-host digital strategist Aminatou Sow, is the premise that if women collaborate with one another rather than competing, it boosts everyone's success — everyone shines. CNN's female anchors and correspondents embody the concept. Serfaty, in the middle of one of the most stressful reporting days of the year, finds out that I have an upcoming job interview, asks for my cell number, and takes the time to text me two long paragraphs of advice and words of support. Keilar gives me a story idea, writes down her number, and offers to help.

If it is possible to be a dogged reporter, boundlessly ambitious, and also pull up the women behind you, these women are showing the way. I ask Bash if she has her dream job. "It's pretty close," she says, smiling. "As a type-A woman, I always want more." 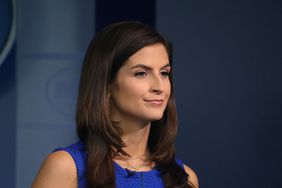