Eric McCormack Dishes on His Sexy New Look on Will & Grace, Plus Which Guest Stars He Wants Back

If you’ve been tuning in to the brand new season of Will & Grace, then you already know the show has managed to fully recapture the magic from its initial eight-year run. From the witty one-liners and over-the-top physical comedy (think Grace Adler and Karen Walker getting locked in a ridiculously high-tech shower and being forced to swim around the climbing water for hours), the NBC series managed to pick up right where it left off. Ok, not quite where it left off ... the writers ditched the entire plot of the final season and chocked it up to Karen’s drug-induced dream. Still, it’s safe to say we’re hooked. Again.

One of our favorite changes in the revival is the updated wardrobe—and Will Truman’s stands out in particular. While Will (played by Eric McCormack) always managed to look impeccable in seasons past, he’s stepped up his fashion game in 2017. “We’re blessed that our costume designer, Lori Eskowitz, is so incredible,” McCormack recently told InStyle when discussing the cast’s collaboration with LGBTQ non-profit Tie the Knot. “During the first season, we were all kind of finding our footing. But from then on, slowly but surely, we've classed Will up—and we sexed him up, too. I think that what we're finding for Will is just sexier, in terms of both his suits and his casual wear. The boxy office looks that he had in the earlier seasons have now been replaced by a really great, sexy, high-end look.”

A Will & Grace–Modern Family Crossover Episode May Be Coming Soon

While McCormack has gone through a style transformation onscreen, it would be impossible to watch the show without noticing the fact that he, quite simply, doesn't appear to have aged since the series’ initial run wrapped. So, what's the secret to his youthful look? “It's goat's blood,” joked the 54-year-old star. “Really, I have no idea. I just keep my fingers crossed. Maybe it'll all just melt one day.”

Despite the impressive fact that the cast still looks the same, there’s no denying that time has gone by. But in some ways, that’s a good thing. For instance, back in 2000, it was a huge deal that Will and Jack kissed on air during a live segment of The Today Show. A same-sex kiss wouldn’t elicit such a reaction now, but at the time, it was monumental.

“What I loved about that episode was that it was very much about the idea of a gay kiss on television—and that we hadn't really seen one on network television, at least not on the big three [networks],” said McCormack. “It wasn’t just, ‘Oh, tune in tonight, Will kisses a boyfriend.’ Plenty of that was to come, but this was specifically about addressing an elephant in the room. It was like, when are we going to treat a gay couple onscreen the same way we treat a straight couple? We were really aware of that, and it might have been the first time that our show was doing something besides just being funny. We were making a statement within a statement, and it was exciting.”

The plot also brought the cast to a new location. “That was the first time we shot in New York,” said McCormack. “We took the characters outside of Stage 17 and put them on the streets, and it was pretty awesome. To this day, whenever I see Al Roker, we have that connection. And we'll always have that.” Roker was just one in a long line of famous faces to appear on the show during its run. “We had so many guest stars back in the day,” said McCormack. “We’d hear rumors that Michael Douglas was coming on the show and wonder, ‘Whose story is he in? Who gets to be with him?’ Matt Damon came on, and I didn’t get to have any scenes with him. That's just how it was.”

If McCormack had to choose one past guest star to bring back, who would it be? “My first couple of answers to that are impossible, because they're gone now,” he said. “Sydney Pollack, who played my dad. Gene Wilder, who played my boss. Gregory Hines, who also played my boss. I wish those guys were around to take a victory lap, for sure. But now, my main answer is Blythe Danner as my mom. I keep badgering the writers, asking, ‘When do we get Blythe back?’ She was a huge piece of the show and a huge piece of a lot of characters, but I think particularly for a gay man, to meet the mother told a lot of the story. And I think that's what she brought to the show. She'd walk in the door and you went, ‘OK, I get who Will is now.”

This season has already seen Dear Evan Hansen star Ben Platt make an appearance, and there’s still plenty of time for the new guest list to take shape now that NBC has already picked Will & Grace for another season in 2018. And just two episodes into the revival, the cast has felt major love from viewers. “So far, it's been off the charts,” said McCormack. “The positivity that we received before it aired, both from fans and critics, and since then has been fantastic.”

While season nine has taken shots at our current political landscape in its first few episodes, don’t expect the administration to be a focus moving forward. “People may be disappointed to find out that we don't stay quite that political for the rest of the run,” said McCormack. “Sometimes we won't mention it at all. But it was a great way to launch—especially because of what we did last September with the video for Hillary [Clinton]. So it'll always be an arena we dabble in.”

Political or not, we're sure the jokes will keep us laughing. 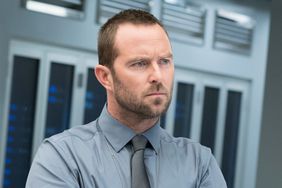