The veteran supermodel talks flexibility, staying humble, and how the industry's only gotten tougher on the young women entering it.

Christy Turlington Burns may have changed modeling as we know it when she, along with a particularly impactful group of model pals, became known as 'the supers.' But don't let her legendary status fool you into thinking any of it was easy.

On this week's episode of Ladies First with Laura Brown Turlington Burns opens up about the pressures that mounted at the beginning of her career.

"I really wanted to be able to figure out who I wanted to be before I started to talk a lot," she told InStyle's editor in chief Laura Brown. "I think with age, with experience comes confidence. I mean, honestly, even when I look back at some of the interviews backstage, they just throw a mic in front of your face and you've never been told what to say, how to frame your thoughts. It really is throwing people to the wolves. And so some of that stuff is really funny to listen to now, but in retrospect, the soundbites were pulled. It's just fodder, [they] throw you in there, and if you say something stupid, and that's even better. That's not fair for anyone."

That experience, along with some not-so-subtle advice from friends are part of what's kept the model humble, she said. In fact, one particular conversation with a friend stands out in her memory as an "aha!" moment.

"I can remember being really young and bragging about something to one of my close friends and her saying at one point, 'You don't have to be good at every [thing],'" she recalled. "Those words come back to me all the time. I took the cue, and I heard her loud and clear and I'm a much more gracious person. I was always like, 'I can do this, and I can ski, I can play soccer, and I can do this.' And, and I realized, like, 'Shut up, just do it.'"

That grace has extended into her second career path, as she now counts herself a nonprofit founder. After experiencing complications in pregnancy and childbirth, she founded Every Mother Counts which works to increase access to maternal healthcare around the world.

Christy Turlington Says Every Woman Deserves Equal Care, No Matter the Color of Their Skin

"Once you learn about some of the statistics, you know, girls and women do not need to die from pregnancy- and childbirth-related complications in 2021," she says. "And people who are of color do not need to be disproportionately impacted by our bad healthcare system."

The last year has required more of EMC than Turlington Burns probably imagined at the outset. During the early days of the Covid-19 crisis, when birthing people weren't allowed to have a labor partner in the hospital, Every Mother Counts stepped up to provide support.

Andra Day's Parents Were "Concerned" While She Was Filming The United States Vs. Billie Holiday

"People that were pregnant [were] being told they couldn't have a birth companion, let alone a partner or spouse," she said. "And that was terrifying, but we also saw the side from the healthcare perspective, which was — of course, in a normal time, they would encourage as much support as possible for a pregnant woman or childbearing person. But because there was such a lack of protective gear, and because there was such vulnerability on the side of the healthcare providers, we understood, too, that they were terrified, and they wanted to minimize the amount of people coming in and out of the hospital or in the maternity ward."

She continued, "So much of the work that Every Mother Counts does is about that. It's advocating so that women understand how best to self-advocate, but I mean, it's hard to self-advocate when you're in labor. So having a partner or a trusted person by your side to help be that voice for you, to help inform you and bring you comfort [is important]."

This isn't to say she's completely left modeling behind, though Turlington Burns says she's more selective now with which jobs she'll take — either as a favor to a friend, or for the paycheck ("I own a nonprofit and I don't take a salary"). But she always makes time to practice yoga.

"Probably more than 30 years or so I've had a practice, but in normal, busy times when I travel a lot and I work too much, I kind of squeeze that time in for myself," she told Brown. "I feel that very early on in the pandemic, it was like a perfect time for so many reasons to really reignite a daily practice."

And that practice has paid off in flexibility. "I would say I'm more bendy [now] in some ways just because I'm so consistent with my practice now. I mean, there are certain things I could naturally do when I was 18 starting to practice yoga, but over time and over working on a computer, hunched over and giving birth probably, it was harder for me to do certain things like back-bendy things. I just didn't like them. Now, I love them." 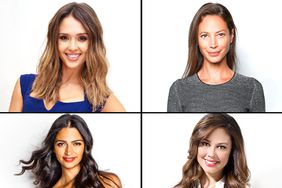 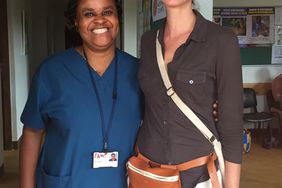