And Lily Collins teased that another season is coming.

Fans are speculating a major pop-culture crossover in season 3 of Emily in Paris. After Kim Cattrall infamously turned down the chance to revive her Sex and the City character, Samantha Jones, for the reboot, fans couldn't help but wonder if Jones could make an appearance in the next season of the cult-favorite Netflix show.

If you're watching And Just Like That ... (and even if you're not), you know that Cattrall's character is supposedly off working her public relationships magic in London, England, just a quick trip from Emily (Lily Collins) and her booming marketing firm, Savoir.

Everything You Need to Know About Emily in Paris Season 2

Fans noticed major parallels between the characters, from their location to their sex positivity to their career in communications. Plus, both series were created by big-time Hollywood producer Darren Star — with SATC costume designer Patricia Field now responsible for Emily's kitschy, Parisian looks — making a collab that much more believable.

One Twitter user wrote, "Current theory: Samantha has supposedly moved overseas, hence her lack of presence in the new SATC TV series. Then she shows up by total surprise in a crossover episode of EMILY IN PARIS. I would watch Samantha try to tolerate Emily, 100 percent."

Collins fueled the flames by teasing a possible season 3. The actress posted photographs from her Vogue Hong Kong cover featuring a jet-black shag haircut and dark makeup writing, "Season 3 pivot?? Who's with me? ..." Collins used the same caption when reposting a fan's Tweet with the magazine images that read, "Emily in Berlin." 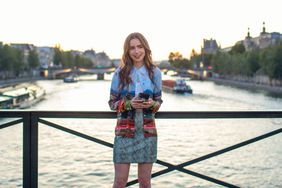