What Big Little Lies Gets Right About Abusive Relationships

The second season of the HBO series explores how the effects of abuse can linger even after an abuser is gone.

At the start of the second season of Big Little Lies, Celeste Wright (Nicole Kidman) goes to see her therapist, Dr. Reisman (Robin Weigert). Not only is she grappling with her grief over the death of her husband, Perry (Alexander Skarsgård), she’s working through the complicated feelings of loving and missing him, despite his physical and emotional abuse.

For us, the viewers, it might even have been a relief to see Perry pushed to his demise at the end of Season 1 after he repeatedly attacked Celeste, but the reality of an abusive relationship is much more complicated.

According to the Centers for Disease Control and Prevention, nearly 1 in 5 women and 1 in 7 men in the U.S. report having experienced severe physical violence from an intimate partner in their lifetime — and those experiences can vary greatly. But Tarsha McCallum, LMSW, senior director of shelters at Safe Horizon, says it’s common for survivors of abuse to still love and care for their abusers.

“For those in an abusive relationship, the abuse usually doesn’t happen every day,” she tells InStyle. “This might still be a loving relationship; you fall in love with them, and you may have been with them for many years, and although there is abuse, it does not stop the love.”

According to the National Coalition Against Domestic Violence, it's common for survivors to still love their abuser, and to want the abuse itself to end, but not the relationship.

McCallum adds that while outsiders (or viewers) might only see the violence in an abusive relationship, there are also days and moments when the perpetrator is loving, caring, even apologetic to the survivor, and a survivor may look to those moments as reasons to stay in the relationship.

“We don’t think about both parts, and love is complicated,” she says. “It lends itself to the hope that things will change.”

That’s made clear not only in the first season of Big Little Lies, when Celeste tries to work things out with Perry in couples’ counseling, but also in Season 2, as she explains to her therapist that she can’t stop missing him, even if she can rationally understand that his behavior was abusive.

“You miss the war,” Dr. Reisman tells her in response, encouraging her to look at her feelings as a form of PTSD, not unlike soldiers who find it hard to adjust back to civilian life. Celeste doesn’t quite believe her, and it certainly doesn’t help that Mary Louise (Meryl Streep) refuses to accept that her son was capable of beating his wife and consistently casts doubt on Celeste's memories.

In another scene, she touches herself as she revisits old videos of him from Skype, showering her with love and affection — almost as if she’s trying to remember the way he was when the relationship was good, even if that doesn’t paint the whole picture.

Though Celeste might logically know that she can now be free of his abuse, it doesn’t stop her from mourning his death, and McCallum says that’s a normal, valid response.

“It makes a lot of sense that she is grieving her husband,” she says. “Because when you look at the episodes, he was a good provider. When they weren’t fighting and he wasn’t abusive, he was good to her. I think she wanted him to improve, and she wanted to keep their marriage intact.”

Not to mention, Celeste and the rest of the Monterey 5 are working through the trauma of having borne witness to his death after Bonnie pushes him and he falls to his death in the first season. In addition to the grief and loss Celeste is going through, she’s also experiencing the guilt of being a part of his death.

“They didn’t plan to kill him, and that brings on guilt because she didn’t want him to die, she just wanted him to stop,” McCallum says.

Rather than paint Celeste as a “weak” victim for longing for a troubled relationship, the show treats her with the kind of nuance and sensitivity that we should extend to all domestic violence survivors.

If you or someone you know is experiencing abuse, please call the National Domestic Violence Hotline at 1-800-799-7233, or chat online at thehotline.org for help. 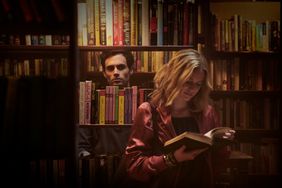