Royal expert Katie Nicholl says the rift is still very much there.

Even though reports come out every week that Prince William and Prince Harry are getting closer to being the brothers we all know and love, royal insider Katie Nicholl says that even though fans want a happy ending for them, things just might not work out — ever. She explained that William may not ever be able to forgive Harry for leaving his post as a senior royal when he and Meghan Markle decided to move away from England and settle in California. The decision, she explains, put the Cambridges in the spotlight in a way they weren't expecting quite yet. And with all the attention on Kate and the Cambridge kids before he expected it, William just couldn't deal.

"[When Harry stepped back from his royal duties], it was very difficult for William, and I think that’s partly why this rift hasn’t been resolved, because, you know, William can’t completely forgive Harry for what he’s done," Nicholl told Us Weekly.

She went on to say that William and Kate were suddenly in the "prime sort of center" and that it is one of the reasons that William is still holding a grudge against Harry.

"It had a huge impact on him, on [Princess] Catherine, on their young family. It put them in that prime sort of center," she added. "It moved them center stage far sooner than they would otherwise have been."

Nicholl went on to say that William might have been happier with the move if he was given some time to digest (and prep).

"I think William had always expected that he would have the support of his brother," she continued. "And I think it wasn’t just that Harry had chosen to leave and to stand down. I think a lot of it was how he chose to do that and what William saw as great disrespect to the institution and to his, to his family, to his grandmother."

For what it's worth, Nicholl says that Harry and Meghan never actually wanted to step back entirely. Instead, they wanted to create part-time positions. However, it just didn't work out that way.

"I think, ultimately, it did have to be black and white because this was about preserving the reputation and the integrity of the Crown and the institution," she said. "And so, while Harry and Meghan had hoped there would be a third way, for the Queen, it was very simple. You are either in or you are out." 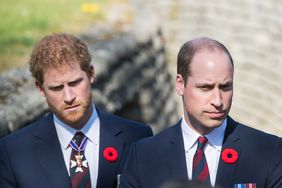