According to a self-defense expert, the The White Lotus character made one dangerous decision after another.

If you’re fresh off a self-induced panic attack after watching the finale of The White Lotus, we feel you. And if you’re saying to yourself, Oh, Portia. You beautiful, chaotic, relatable thing, we also feel you. From her moderately adorable complacency in her career, to her cringe yet somehow cute outfits, to her deeply understandable desire to go after the fun, sexy, and a little (a lot) dangerous guy, rather than the sweet, would-never-kidnap-you guy, man, do we get it.

Whether it was out of lust, drunkenness, or pure naïveté, most of us have gotten ourselves into a could-be dangerous situation before. You know, one of those nights that could’ve, maybe, probably ended a lot worse than it did? Yeah. Let’s not list them, because this is about Portia’s near-fatal poor choices. Maybe ours haven’t been quite so sketchy, but probably still sketchy enough. However, ending up trapped with a guy who is plotting your elaborate death, phoneless, and in a foreign country is, well, a lot. But it’s not just good TV. Terrible things do happen when we don’t keep our wits about us, which, bless her heart, Portia definitely did not do.

Pulling a Portia is not all that hard to do, though, especially when you’re blinded by some sexy British guy who seems really intent on showing you the time of your life. It’s the stuff of fantasies, really. But, by the looks of things, if it looks too good to be true, it probably is. I mean, that dude was telling her like eight lies a minute, but she was in la-la land until it was almost too late. But Portia wasn’t in a great place emotionally, and that made her an easy target. Scammers (and probably murderers) pray on vulnerability. The key is to keep your antenna up.

Paying attention to red flags might not always be easy, but it’s essential. Megan Heidt Carpenter is a certified personal trainer, boxing coach, and the directing coach at Strike Studios in Hunt Valley, Maryland. She believes that even though most of us have had worrisome experiences, many “people and women struggle to trust their gut these days.”  She says, “If you are seeing red flags, take a step back. Call a friend and let someone know where you are and what the situation is. Always listen to those that care about you if you doubt yourself.” Carpenter also recommends using the app LIFE360, which tracks your location and shares it with your chosen contacts.

Portia definitely missed the boat (literally and figuratively) on that, but there are other ways she could’ve protected herself. Even if she missed a few red flags, if she had paid attention to her basic instincts, she would’ve crept out of that hotel, phone in hand, while her kidnapper was passed TF out. But she ignored those instincts hardcore because she didn’t want to make a scene, be a buzzkill, whatever. The thing is, instincts exist for a reason. Because they are usually spot on.

Carpenter says that we need to tune in to them because “with everything from technology, the food we eat, and how much comfort we experience” we’ve become totally accustomed to being happily disconnected from our bodies. “We live in a digital world and are numb to the outside world,” she says. “Our survival has become attached to money rather than physical instincts and connection to community.” That was certainly true for Portia, who was distracted by her phone, her failing career, and then, bam, Hottie McMurderer.

Once Portia knew what was going on, things kept going off the rails. Really, it was because she kept playing along, for the sake of appearances, even after she fully knew that her kidnapper had stolen her phone and that nothing was what it had seemed. She could’ve made a public scene and been rescued by a concerned passerby, but instead got in a car with her kidnapper, essentially driving to her death. She also confronted her kidnapper while alone in his car, instead of in public. According to Carpenter, that was a major error because you should always “know your exits” and “know your surroundings,” which Portia definitely did not. She also says you should “try and make yourself known somewhere that has cameras to get your attacker on tape,” but to avoid yelling, at the risk of angering your attacker.

Luckily for Portia, she never had to defend herself physically. But if she had, we imagine she would’ve been a fighter. If she wanted to survive, she would’ve had to have been one, and according to Carpenter, fighting back is the best way to stay alive. She says the “last resort is to fight quick and dirty.” She recommends a swift “kick to the groin.” She says the “strongest points for women are kicks from a distance.” In “close combat,” that means “elbows, knees, eye gouging.”

Not everyone fared as well as Portia. RIP our beloved Tanya McQuoid. But at least we may end up with another season of Portia’s outfits and antics. If she’s learned anything, season three will open with her in a dope matching workout set, practicing some martial arts. 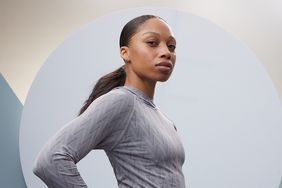 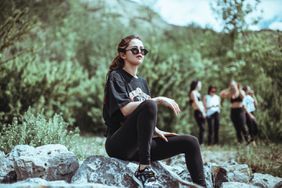