Plus, why she unwinds after a long day with Star Trek: Discovery.

Elizabeth Warren is not only famed for "persisting" but for having a plan. Many of them. A schoolteacher-turned-Harvard Law professor-turned-politician, Warren established the Consumer Financial Protection Bureau following the housing crisis of 2008. Since taking office in 2013, she has been a populist crusader for women's rights, climate change, health care, taxes, and the economy. Look to her Instagram for real-time reactions to issues plaguing the country (in the week after we spoke it was the New York Times' exposé on Donald Trump's taxes, Amy Coney Barrett's nomination to the Supreme Court, and the decision not to charge the officers involved in the death of Breonna Taylor). As she actively campaigns on behalf of former Vice President Joe Biden and Senator Kamala Harris, her onetime rivals for the Democratic presidential nomination, Warren, like her dear friend, the late Justice Ruth Bader Ginsburg, remains as steadfast as ever. "I like women who fight back, who speak up, who demand change, and who get big things done," she says.

What was it that struck you most about RBG? She may have been tiny, but Ruth turned every barrier into an opportunity for change. She blazed a trail for women's rights, worked tirelessly to protect our democracy, and helped to secure justice for the most vulnerable. We honor her by defending and fighting for the things she defended and fought for.

The Loss of RBG Is an Ending — and a New Beginning

What do you have to say to the people who are still undecided leading up to the election? Vote as if your life depends on it because it probably does. Everything happening around us right now will basically be on the ballot. The racial inequalities we see, shrinking opportunity for millions of Americans, a pandemic that continues to spiral... Donald Trump is doing everything he can to accelerate it. Joe Biden will do everything he can to bring it under control.

What are your memories of first meeting Senator Harris? I got to know Kamala on the phone. In the lead-up to the crash of 2008, Kamala was the attorney general for California and trying to protect California homeowners. I was the person clanging the bell about the housing bubble and how the giant banks were going to take down American families and our entire economy. Kamala and I started working together long-distance along with a lot of other attorneys general around the country. When I was thinking about running for Senate from Massachusetts, Kamala came to see me. We sat on my porch, and she gave me advice about running for office. Kamala told me about a lot of what I would encounter and gave me ideas and guidance on how to manage it. Then I tried to help her when she ran for senator. It's been a back and forth, woman to woman, helping each other as we moved into new roles. I'm delighted to be supporting her now for vice president of the United States. Woo-hoo!

What did she say you would encounter? Kamala made it clear that it's lonely to run for office. There are a lot of people around, but, ultimately, you've got to make a little space for yourself. You get caught up in the whirlwind, but you need a little space. For me, it's things like spending time with [my husband] Bruce and [dog] Bailey and getting out and walking, that sort of thing.

Are there other ways that you like to unwind? Do you binge-watch anything? Yes. We're in the middle of Star Trek: Discovery right now. Season 2. It's really good. Michael Burnham is my new favorite character.

The Trekkies are going to love that. Oh, yes. Every night, no matter how late it is when I close up, we have dinner together, usually have a beer, and sit and watch TV for about an hour. It's just a chance to unwind and feel like a normal person for a while.

What Is Voter Suppression, and What Does it Look Like?

We learned about your affinity for Michelob Ultra when you appeared on [Stephen] Colbert's show. He makes fun of my beer-drinking habits. I love the beer I drink. It is the club soda of beer.

I read that you love Pond's — is that your skin-care secret? I'm on a WhatsApp chain with some very smart women, and there is a lot of talk about your lovely neck. It's moisturizer multiple times a day. There's no such thing as treating your skin too nicely. It's what I love about my Pond's. Keep a jar of it nearby, and when you're watching TV at night, take a little out, rub it into your cuticles and maybe even your toes. It feels good. It feels like you're taking care of yourself, and maybe it does make you look a little better over time.

Speaking of taking time for oneself, how do you recalibrate after running in a presidential race the way that you did? Well, when I dropped out, I went from working 24/7 to run for president to working 24/7 to try to deal with an unfolding pandemic and a president who had no plans. It was jumping from one fight to another... Because of the circumstances, there just wasn't time to kick back and grow a beard and do the things that other politicians have done when they've left office [or a race].

We often ask women featured in the magazine about ambition. Men are expected to be ambitious, but women are often criticized for that same thing, especially in politics. How have you managed that? I like women who fight back, who speak up, who demand change, and who get big things done. I had people tell me back in 2011 that a woman would never be elected senator from Massachusetts. I had people tell me back then that we would never beat the big banks to get a consumer agency. But you don't get what you don't fight for.

What advice do you have for someone who perhaps is a schoolteacher and does have political ambitions or interests? I never thought I'd get into politics, so it's possible to do this. We need more women in politics. More teachers. More single mothers. We need Black women. We need other women of color at every level of government. We need women leading the charge to make our government actually work for all the people, not just for the rich and powerful. I would tell every woman who's thinking about running for office, "Understand your own power. You have the power to step up and be the candidate. You have the power to step up and help another candidate." That's how we build the movement that will make real change.

How do we fix the systemic racism that exists in this country? We need to attack it at its roots in every part of society, from housing to education to health care and more, but it is important that we think about our own responsibility. I want to think about my responsibility as a white person and the responsibility that other white Americans have at this moment. We need to ask ourselves what we are doing proactively every day to dismantle systemic racism in our communities, in our workplaces, and in our circles of influence. It is not enough to stand as an ally. We must go further and be anti-racist.

As a true agent for change in this nation, if you were given an opportunity to join a Biden administration, would you take it? Right now the focus is on getting Joe Biden and Kamala Harris elected, winning the Senate, keeping the House, and getting Democrats in office up and down the ballot. Lives, livelihoods, and our entire democracy are on the line. That's what I'm focused on.

For more stories like this, pick up the September issue of InStyle, available on newsstands, on Amazon, and for digital download Oct. 23. 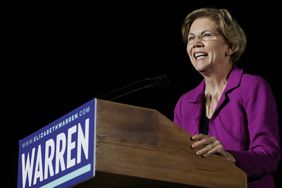