182,448 Black People Went Missing in the U.S. Last Year — These Sisters Are Working to Find Them

Sisters-in-law Natalie and Derrica Wilson created the Black and Missing Foundation to bring missing people of color back to their families, often without adequate law enforcement or media support. And they're doing it in their spare time.

Derrica and Natalie Wilson rise early in the mornings, before they clock in to their full-time jobs and then burn the midnight oil to help solve the countless missing persons cases plaguing Black communities across the United States, which they say have been disproportionately overlooked by both law enforcement and national media outlets. "If you see something wrong, you have to be willing to come up with a solution to fix it," Derrica says. "So we became the change."

The Wilsons have been sisters-in-law for nearly two decades and don't even consider each other in-laws anymore. "She's my sister," Derrica says. But the moment they became coworkers traces back to a family gathering, one of many, in 2004. They were discussing Tamika Huston, a 24-year-old woman who'd gone missing from Derrica's hometown of Spartanburg, South Carolina. The national media wasn't covering the case. Outlets at the time were hyper-focused on Lori Hacking, a Salt Lake City, Utah woman who had gone missing. A year later, Natalee Holloway quickly became a household name after she disappeared while on a senior trip to Aruba.

Looking closer at cases like these, the Wilson sisters found that in America, 40% of people who go missing every year are people of color, while only 13% of the U.S. population is African American. Of the missing people who received national media coverage, Derrica and Natalie couldn't recall one who was Black. In the wake of the recent Gabby Petito tragedy, this disparity is receiving some of the attention it deserves.

Derrica, who worked in law enforcement, was the first and only African American female police officer in the history of the Falls Church Police Department in Virginia. Natalie has worked in public relations for 15 years. They knew that, together, they were a uniquely qualified team to be the change they wished to see. "When we had that discussion, it really all came together, like this is something not that we could do, this is something that we have to do." In 2008, they officially launched a non-profit dedicated to the cause: Black and Missing Foundation. Their tag line is "Help us find us," and their mission is to help Black families to bring their loved ones home, which they do by providing resources to galvanize searches and to spread vital personal-safety education in minority communities.

The resources needed to launch an investigation into a missing person case can be prohibitively expensive. Search parties, police canines, drones, divers, and even printing flyers can be costly — but these tactics are also extremely effective. Widespread media coverage helps a lot, too, as it inspires public intrigue which can produce crucial tips, potential leads and rogue investigations. When the media turns its attention on a case, so much that a victim becomes a household name (like Laci Peterson, Natalee Holloway, and now Gabby Petito), it puts pressure on law enforcement to produce answers. The families of missing people whose stories aren't told on such a large platform can be left to navigate a painful and often fruitless search alone. That's where Natalie and Derrica come in.

"Oftentimes when families are reaching out to us, we're their last resort," says Natalie. "We meet families at the worst point in their lives. They're desperate, they're searching for their missing loved ones." Once the sisters are in touch with a family, the first thing they do is make sure a missing person report has been filed. "Sometimes the police report isn't taken seriously," says Natalie. "So Derrica will hold their hand in working with law enforcement. Then the case is uploaded to our clearinghouse and we utilize social media to get the word out instantaneously."

Next, they tap into news outlets to really spread the word. "Media is very important for a couple of reasons," Natalie adds. "One, it alerts the community that someone is missing, and they can help search for them and to be vigilant as they're going about their day, and it increases the chance of recovery. But most importantly, it adds pressure to law enforcement to add resources to the case."

Derrica and Natalie spoke with the father of 24-year-old geologist Daniel Robinson, who went missing in Arizona in late June of this year. His car was found a month later, overturned in a ravine with his keys, phone and wallet nearby. "His father traveled from South Carolina to Arizona, to look for his son, because quite frankly, law enforcement, they're not doing anything," says Derrica. "He hired a private investigator. He's had to exhaust money and facilitate search teams. And that's devastating."

CNN had David Robinson II on to discuss his son Daniel's mysterious case and its murky details, amid an outpouring of concern regarding the disparities in case coverage following the Gabby Petito story. "I don't think they did enough," Robinson told anchor Chris Cuomo of the authorities' handling of his son's case. Daniel Robinson has only recently been covered on national news. He's been missing for three months.

The Black and Missing Foundation provides crucial resources for families when law enforcement hasn't allocated enough, or any at all, for the daughter, son, sibling, or relative they're desperate to find. "It's very expensive for families to search for their missing loved ones," says Natalie. "We hear all the time, they have exhausted all of their life savings spending time traveling just to get answers."

The foundation helps cover travel and reunification expenses or, in the tragic case of a missing person being found deceased, burial expenses. They help design and pay for flyers and create shirts, so search teams can be in a recognizable uniform. The non-profit also provides financial assistance for circumstances involving children with missing parents who need supplies for school, basic essentials, or even in hiring a private investigator and search teams, which can quickly add up to tens of thousands of dollars.

First a Flyer, then a Family Reunited

The Wilson sisters' efforts, although at times result in heartbreaking outcomes, are not made in vain: They get results. In 2017, the case of a 16-year-old missing girl in Baltimore was solved after Natalie and Derrica became involved. The Black and Missing Foundation had paired up with local media stations as well as shared flyers with the teenager's photo across social platforms. The girl had left her high school with someone who had befriended her online, then began to traffic her using ride-sharing apps. One Uber driver had seen the teenager's photo on a flyer shared by Black and Missing Foundation and contacted them. They immediately notified the FBI. The girl was reunited with her family after six harrowing days.

Also in 2017, the foundation was able to aid in the search of a single mother who had gone missing while on vacation in New York. She, too, had been held against her will and trafficked beginning in August. By November, Derrica and Natalie had assisted in locating the woman, arranged her travel home to Virginia, and helped secure care for her subsequent PTSD.

Prior to the pandemic, the foundation raised money with an annual 5K run, which they hope to host again in the post-COVID days to come. They have always accepted donations through their website and will continue to do so, and they are currently looking to add a grant writer to their team with the hope of obtaining additional funds through government and foundation grants.

The Wilson sisters' work is far from complete. The women, who are wives, mothers, and still working full-time jobs — Derrica now in public safety for the DC government and Natalie still in public relations — credit their own supportive families in helping them to devote so much to their cause. "We spend so much time helping these families," says Derrica. "And our families have to sacrifice to be able to join us in this movement, by allowing us to lend ourselves to these families who are at their lowest point, to make a difference."

"We have to continue to fight for this voiceless group."

In the nearly 14 years since Black and Missing Foundation has been up and running, the non-profit has made great strides. They went from pounding on doors to get news coverage to forging media partnerships that have helped bring missing people home. In November, they have a docu-series coming to HBO, Black and Missing, which Natalie and Derrica are currently executive producing to highlight important cases and bring them to a platform with far reach and massive influence.

The foundation is currently based in Maryland, but the sisters and their team work remotely for now. They hope to open satellite offices in cities where Black people are the most likely to be reported missing: Los Angeles, New York, Miami, Chicago, Atlanta, Baltimore and Detroit among them. "We want boots on the ground," says Natalie. "We want to have programs in place. We want to have national media partnerships that can help us. And we need more community involvement, because we believe that someone always knows something about a missing person."

When InStyle asked the Wilson sisters for photos of them to include in their Badass Women profile, Natalie asked if they could provide images of still missing Black people instead. "We need to continue the conversation about the disparity in media coverage and assistance from law enforcement regarding our missing because they are valuable members of our community. We can't let this story die. We have to continue to fight for this voiceless group."

The flyers in this article represent women who are out there, whom Derrica and Natalie, on behalf of their families, are still working to find. Their organization has contributed to closing nearly 400 missing persons cases to date — a number that is huge and devastatingly small at the same time.

26 Black Beauty Brand Founders Changing The Industry
It's Been 10 Years Since Rebecca Black Released "Friday," and the Internet's No Kinder to Young Girls 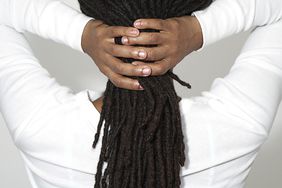