"It was really scary and something that I really had blocked out for many years."

After The New York Times published a story about the troubled teen industry on Tuesday, Paris Hilton spoke out about her experience with sexual abuse when she was enrolled at Provo Canyon School, a "therapeutic boarding school" in Utah. Hilton shared that she and other students were subjected to "medical exams" by staffers that she insists were not medical professionals.

"It wasn't even with a doctor — it was with a couple different staff members, where they would have us lay on the table and put their fingers inside of us," she said of the exams, which would take place at "three or four in the morning." "I don't know what they were doing, but it was definitely not a doctor."

She went on to say that she had blocked the memories, but that the NYT article was bringing them back and she realizes now that it was sexual abuse and not anything related to a cervical exam, which she believed in the past.

"It was really scary and something that I really had blocked out for many years, but it's coming back all the time now and I think about it," she said. "Now, looking back as an adult, that was definitely sexual abuse."

She explained more on Twitter, providing even more detail as to what happened to her at the school.

"Sleep-deprived & heavily medicated, I didn't understand what was happening. I was forced to lie on a padded table, spread my legs & submit to cervical exams," she wrote. "I cried while they held me down & said, 'No!' They just said, 'Shut up. Be quiet. Stop struggling or you'll go to Obs.'"

She noted that the "exams" were a "recurring experience not only for me but for other survivors," saying, "I was violated & I am crying as I type this because no one, especially a child, should be sexually abused. My childhood was stolen from me & it kills me this is still happening to other innocent children."

She finished by saying "it's important to open up about these painful moments so I can heal & help put an end to this abuse."

Hilton was enrolled in the Provo Canyon School in the 1990s. She first shared her experience at the school during her 2020 YouTube documentary This Is Paris. Since the documentary debuted, Paris has been an advocate for child facility reform and even urged Congress to pass the Accountability for Congregate Care Act in 2021.

"I wish I could tell you that what I experienced and witnessed was unique or even rare, but sadly it's not," she said as she worked to get the bill passed. "Every day in America, children in congregate care settings are being physically, emotionally, and sexually abused. Children are even dying at the hands of those responsible for their care." 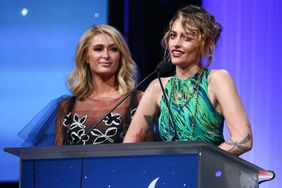