Zoë Kravitz Turns 27! See Her Beauty Transformation Through the Years

Happy 27th birthday today to the always fashionable Zoë Kravitz! The birthday girl has had quite the year. Not only was she named InStyle's 2015 Breakthrough Style Star for her signature bohemian-chic looks and trend-setting bikini looks featuring fashion-forward body jewelry, but the actress turned musician has also cemented her status as a Hollywood A-list actress after starring opposite January Jones in the 2014 film Good Kill as well as in The Divergent Series.

When Kravitz isn't busy making her mark in film, she's following in her father, Lenny Kravitz's, footsteps in the music industry. In 2014, her band, Lolawolf, released their first EP, Lolawolf, followed by a full-length album, Calm Down, later that year. In addition to bringing her sultry singing voice to the band's eclectic sound, Kravitz's signature style adds an extra element of cool to Lolawolf's overall image.

The birthday girl's look, while insanely chic and cool, wasn't always quite so edgy. Over the years, Kravitz has really come into her own style-wise. From her boho-inspired fashion to her always on-point hair and makeup, the actress keeps us on our toes and always arrives in style. In honor of her special day, we've rounded up her best beauty looks through the years. Take a look now! 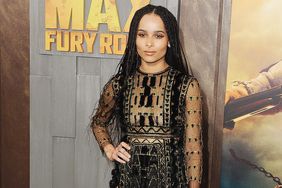 How Does Zoë Kravitz Find Time to Make Music and Star in Movies? "I Just Don't Sleep!"