If you woke up today thinking it was Friday when it's actually just Tuesday (guilty), Zac Efron is here to make the next 24 hours a little easier. The Baywatch star has stepped up his Instagram game since signing on to the film, posting sweaty workout pics and ab-baring shots, and he took to his feed on Monday night to grace us with another.

Efron shared a 'gram of him benching quite the set of weights, and it is very sexy to say the least. "Post filming chest/tri's. Now #GOT with Chicken/veggies #teamnosleep," he captioned the shot. Ain't no rest for the incredibly fit and good looking.

But it's not all just sexy pictures when it comes to Efron's Instagram. On Tuesday morning, he posted two shots of the full Baywatch cast running on the beach. While all six of them are in sync in the first shot, Efron takes a tumble in the second, landing flat on his face. We love a guy with a good sense of humor. 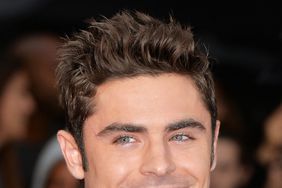