Portraying the legendary Yves Saint Laurent, who revolutionized women’s fashion and pioneered ready-to-wear, is a breakout role for Pierre Niney in Yves Saint Laurent, the biopic based on the designer’s turbulent life that opens today in select theaters. Niney, whose uncanny resemblance to Saint Laurent is as astonishing as his transcendent performance, worked closely with Pierre Bergé—the co-founder of YSL and longtime partner to Saint Laurent—to prepare himself for the challenging role.

The film depicts Saint Laurent’s steep rise to greatness, becoming the creative director at Christian Dior at the young age of 21 and launching his own couture line at 26, and his steeper fall as a result of his manic depression and drug use. The film also details the many ups and downs of the designer’s lifelong relationship with Bergé. The performances are exceptional and the overall design is stunning (and very colorful!) as Bergé loaned out 77 vintage YSL pieces for the production and allowed many of the scenes to be filmed at Saint Laurent’s real home in Marrakesh as well as his original atelier in Paris.

In honor of the film's debut, here are five standout moments from the designer:

1. The Trapeze Dress: In 1958, at the tender age of 21, Yves Saint Laurent presented his first couture collection as head designer of Dior and debuted the trapeze dress. The new fashion that quickly became popularized as the loose-fitting garment afforded women freedom compared to the tight waists they were used to wearing.

2. Ready-To-Wear: In 1966, Yves Saint Laurent became the first Parisian fashion house to launch a ready-to-wear collection, then called “Saint Laurent Rive Gauche.” He created the line in an attempt to democratize fashion, as he believed “fashion would be incredibly upset if its sole purpose was to dress rich women.”

3. Art Becomes Fashion: Yves Saint Laurent was heavily influenced by modern art and pop art and confirmed that fashion could be an art. He designed collections inspired by modern artists Pablo Picasso, Henri Matisse and most famouslyPiet Mondrian and also released a "Pop Art" collection in 1966, inspired by the contemporary art of Roy Lichtenstein and Andy Warhol.

4. The First Tux For Women: Saint Laurent reinterpreted black-tie menswear into an eveningwear alternative to the little black dress with “Le Smoking,” the first tuxedo for women in 1966. When his design was first introduced, it was considered scandalous for women to wear pants outside the home and “Le Smoking” quickly became the bold and stylish choice for liberated women.

5. The Vintage Trend: Yves Saint Laurent often credited “fashion on the street” as his greatest influence, and in the early 1970s spotted vintage frocks on the streets of Paris. This inspired his 1971 collection, “An Homage to the Forties,” which was the first time a couturier used vintage fashion to influence current styles.

Be sure to catch Yves Saint Laurent in theaters now, andcheck out celebrities in the brand's design in our gallery! 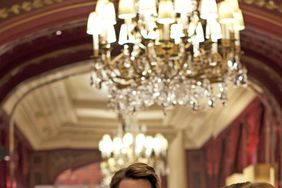 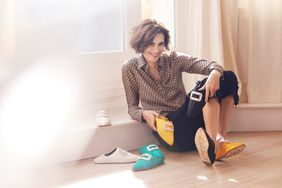 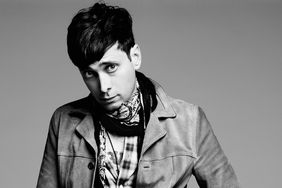