If you've ever dreamed of being a princess, now's your chance. Next month, Julien's Auctions in Beverly Hills, Calif., will auction off several iconic gowns that the late Princess Diana wore.

Included in the auction are three dresses by Diana's good friend and designer Catherine Walker: a green silk georgette gown worn by the Princess of Wales in 1993 (above), a pale pink gown also worn in 1993, and a black-and-white strapless dress. "People have a love affair with [Princess Diana]," Martin Nolan, Julien's Auctions' executive director, said during an appearance on the Today show on Wednesday. He noted that when they have auctioned off pieces from the Princess of Wales in the past, they go quickly and fiercely.

Even if you're more interested in another royal, namely Duchess of Cambridge Kate Middleton, you're in luck: although none of Middleton's clothing will be up for auction, you can bid on a piece of wedding cake from Kate and Prince William’s 2011 marriage ceremony—and it's complete with a keepsake engraved box. You can bid in person at Julien's Auctions in Beverly Hills, online, or on the phone on Dec. 5 and 6. Learn more at juliensauctions.com. 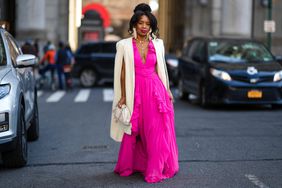 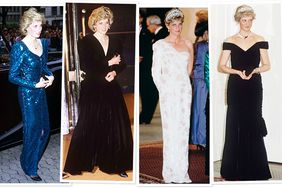