Happy July 4th! But as we head off to barbecue parties and get ready to admire some serious fireworks, we can't forget to acknowledge the ones who put their lives on the line for our freedom. For the past ten years L'Oréal Paris Women of Worth has honored women who are making a difference in their communities, and this year we're putting the spotlight on three amazing women that were recognized for their dedication to helping out our troops and their families.

Operation Renewed Hope Foundation was founded by retired Lieutenant Colonel Deborah Snyder, who served for 21 years as a pilot. Snyder's foundation is on a mission to end veteran homelessness and currently has provided housing and supportive services to over 300 homeless veterans in the Washington D.C. area, enabling vets to become self-sufficient contributors to their communities.

In 2004, when she was only 13-years-old, Brittany Bergquist founded the Cell Phones for Soldiers program alongside her younger brother Robbie. Since then, the family-run organization has provided over 213 million minutes of free talk time and 11.6 million phones for our vets and military members. Bergquist also expanded her efforts by opening the Helping Heroes Home, which assists veterans and their families with emergency funding.

Taryn Davis, a military widow, uses her own personal journey to empower women who have lost their husbands during service through her nonprofit American Widow Project. Since its inception in 2007, the organization has provided widowed women and their families with both the emotional and educational support that is needed to get through tough times.

Thanks to Almay, You Can Support the Troops by Posting a Selfie
Was this page helpful?
Thanks for your feedback!
Tell us why!
Related Articles 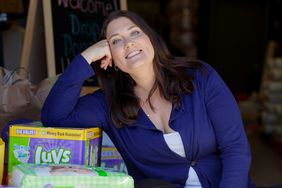 Why This D.C. Mom Had to Create a Diaper Bank for Her Community