Every guest that walked into Paris’s Grand Palais for Chanel’s fall 2016 show Tuesday morning must have felt like a VIP as creative director Karl Lagerfeld welcomed them with "front row only" seats. While Kendall Jenner and Gigi and Bella Hadid earned gazes from the runways with their tantalizing quilted frocks, 15-year-old Willow Smith also left an impression—and marked her ascent into the sphere of Coco-approved royalty with a new gig.

Lagerfeld officially tapped the multi-talented It girl as the newest Chanel ambassadress, joining the ranks of fellow style doyennes and campaign stars like Lily-Rose Depp and Kristen Stewart.

Back of the Cab: Watch Our Review of Chanel's #PFW Runway Show

The daring dresser, who already credits collaborations with Stance as major bullet points on her resume, arrived at the high-profile show dressed in a gray, neoprene-like body suit with a bedazzled belt, cream and black booties, and a black tweed jacket, all of which blended the brand’s classic sensibility with her rock star edge. She also sported a sleek bright blue cat-eye.

Proving to be, well, a teenager, Smith adorably walked in with none other than her mother, Jada Pinkett Smith (below), who looked undeniably chic in strappy sandals, jeans, a blouse, and a printed blazer as she sat next to her daughter. We bet mom is proud. 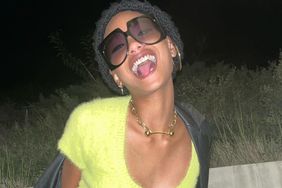 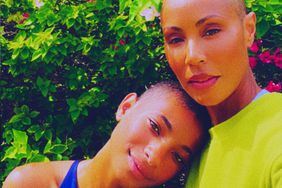 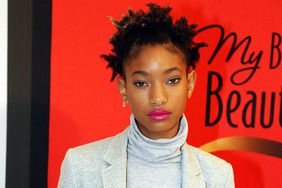