It’s easy to get jaded about Hollywood romances when so many seem to come and go overnight (ahem, Taylor Swift and Tom Hiddleston). Which is why we love it when star couples remind us that true love does exist and can not only stand the tests of time, but of filmmaking.

Case in point: Naomi Watts and Liev Schreiber, who stopped by InStyle’s portrait studio at the Toronto International Film Festival to discuss their new film together, The Bleeder, and gush about each other along the way.

In separate interviews, the actors, who have been together since 2005, dished on what it was like to work with the other, and how it brought out their best qualities.

“It was great. I wish we could work together more,” Schreiber said. But having children together we don’t want to both be working at the same time. This was a perfect opportunity, the perfect sized roles, and it was just fun.”

Anne Hathaway Dishes on Her Post-Baby Body at TIFF

In the film, Schreiber plays New Jersey boxer Chuck Wepner—the man who was the inspiration for Sylvester Stallone’s Rocky.

“It’s more than a boxing story. It’s about this man’s journey and how he deals with this sudden emergence of fame. You really root for him because he is an honest guy,” Watts said.

“I think people know how gutsy Naomi is, but I don’t think people realize how funny she is,” Schreiber said, describing Watts’ character as “brave” and her take on the role as “wonderful.”

“I see that side of her every day so I’m glad that everybody else gets to see it.”

Watts echoed the sentiments, saying: “It was great to to see Liev’s dedication and commitment to this for years. He had this in this corner for almost as long as I’ve known him. His passion never faltered.” She added, “Seeing Liev's transformation was also amazing. He did an incredible job.” 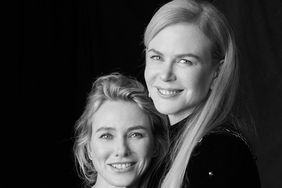