Natalia Dyer and Charlie Heaton’s relationship is well known, but they aren’t exactly forthcoming when it comes to discussing each other in the media. A celebrity couple who doesn’t want to dish on their relationship before an audience of millions? Well, Stranger Things have happened (sorry, had to).

That said, Heaton recently gave insight into the reason he and Dyer kept a low public profile in the early days. “We didn't really know what the relationship was,” Heaton told GQ.

While the dynamics of their relationship were perhaps unclear to Heaton and Dyer, Stranger Things co-creator Matt Duffer saw the connection between the actors from the start. “That first audition, we did a chemistry read with [Charlie and] Natalia,” Duffer told the outlet, “and sparks were flying.”

In November, Dyer cleared up a misconception about her and Heaton’s relationship to InStyle: Their frequently matching outfits. When asked whether she and her co-star planned their coordinating looks, she laughed, telling us, “No! That’s literally never on purpose. You do see articles, and no, we didn’t. I feel like we would naturally go out of our way to not, but it just happens. Kind of a thing.” 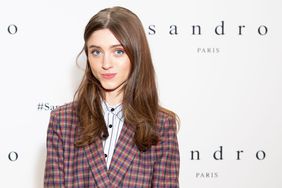