It's clear that 26-year-old Brie Larson has taken the 2016 awards season by storm, first delivering a gilded Calvin Klein moment at the Golden Globes, and most recently pumping up the sex appeal in Atelier Versace at Saturday’s SAG Awards. And while her sweeping wins—she took home the SAG for Outstanding Performance by a Female Actor in a Leading Role—and emotional showdown in Room are forces to be reckoned with, it’s her undisputed candor that we’ve fallen in love with.

In fact, the actress proved she’s everything but a diva inside the SAG Awards pressroom in Hollywood, where she revealed the trick to maintaining her energy on set and the man responsible for the lesson. “I did a film with Michael Chapman when I was 15. He’s an absolutely legendary DP [director of photography]. He really inspired me so much. He comes from very old classic film. When I was finished, he’s the only person I ever asked, ‘Could you give me some advice?’ I said, ‘Do you have any advice for me?’ He said, ‘Yeah—always take a nap at lunch,’” she told InStyle.

“I do stick to that. It’s really important. It requires so much energy to be an actor. It’s not just what’s happening on screen, it’s negotiating your relationships that you’re having off camera as well, making sure there’s a sense of flow and camaraderie to everybody that’s making a movie,” she added.

Preventing a dramatic, too-winded moment is exactly why co-stars will catch a glimpse of Larson taking a break backstage. “It’s exhausting,” she said. “So even taking a twenty minute nap recharges you and you’re ready to go back out.”

We think we may have to take Larson up on this routine, too. 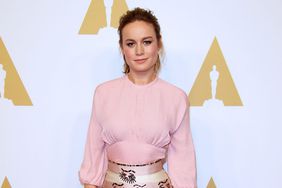