Who Is Timothée Chalamet's Date to the Oscars?

Timothée Chalamet, the breakout star of Oscar hopefuls Call Me by Your Name and Lady Bird, is a Hollywood heavyweight at just 22 years old. The youngest performer to be nominated for an Academy Award for best actor in nearly 80 years, Timothée (endearingly known as Timmy), has claimed millions of hearts and a spot on many an Oscar ballot in the passing months.

This is coming from a bona fide Chalamaniac, by the way. (We’re both Jewish Capricorns, so it just makes sense.) As much as I wish my love for Timmy could exist in a vacuum, away from the frantic tweets and lovelorn declarations of my fangirl peers (and Jennifer Lawrence), I have come to acknowledge that Sir Chalamet (he’s not knighted, but he probably should be) is going to be around for a long time and there’s nothing I can do to thwart the Beatles-at-Shea-Stadium type fandom he routinely evokes.

He’s on the cover of GQ—I can no longer live a lie.

Anyway, Timothée’s been smart when it comes to his fan base. Although it’s known that he previously dated Madonna’s daughter, Lourdes (Lola) Leon, 21, he’s kept talk of his love life to a minimum. He’s brought members of his family to every awards show this season, and as for the Oscars, you can rest easy.

There were no heartbreaking surprises by Timmy’s side on the red carpet on Sunday.

When Jimmy Kimmel asked him who he’ll bring to the ceremony as his date, he told the host, “My family—my mom, my dad, and my sister.” Awww.

He brought his sister, Pauline (an actress herself), as his date to the Golden Globes and the Critics Choice Awards in January. Mom Nicole Flender accompanied her son to the SAG Awards and the Toronto International Film Festival premiere of Lady Bird, as well as many screenings of Call Me by Your Name (CMBYN).

What to Know About Your New Hollywood Crush, Timothée Chalamet

Timothée arrived on the red carpet on Sunday evening wearing a white suit and looking absolutely adorable alongside his mom! Perhaps his sister and dad will meet him inside?

If you fear the end of awards season will result in a dearth of Timothée content, rejoice in the fact that there’s much more Chalamania to be had in the months and years ahead—he’ll star in Beautiful Boy and Hot Summer Nights, both out later this year, and Netflix’s The King in 2019. There’s also Woody Allen’s A Rainy Day in New York (the fate of which has not yet been determined). Not to mention, you can catch Timmy in theaters in a whopping three different movies (Lady Bird, CMBYN, and Hostiles). 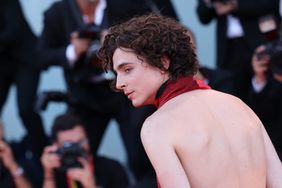