The Moment: Truth be told, the Alexander Wang X H&M collection probably wasn’t intended for me. In a preview this summer, and again yesterday when images were released in advance of the big show planned way uptown at the Armory on the Hudson, the clothes struck me as decidedly normal. Gym clothes in gray and black, tweaked with the designer’s name as an overbearing logo. “WANG!” they screamed in a chorus of black, black, more black, and a little bit of gray. I’m outside the target-audience range here by a decade, possibly more.

Then came the show, and, like most people who were there, I was completely seduced. For one thing, it’s impressive that H&M, a decade after it introduced the first such fast-fashion collaboration with Karl Lagerfeld, can still create a moment of extreme excitement around event shopping. For another, Wang is the perfect designer for the H&M generation, one who creates clothes that are wearable in real-life and still transmit an aura of designer fashion. These didn’t look at all skimpy in their construction or fabrics, nor are they pretentious in price.

The show, just after 8:30 p.m., started with a slickly-produced one-minute video with supermodels pounding through an intense workout that involved flying through brick walls and, in one case, Joan Smalls in pigtails, contending with a fierce wind somewhere in the Artic to grab hold of her WANG-logo beanie. Then black-clad gymnasts poured onto the runway, an asphalt racetrack, bounced magically on trampolines, then gave way to Wang’s warriors (see these looks and more in the video above). They wore athletic leggings with AWs on the knees, and padded utility vests with pockets for water bottles, keys, and phones, and scuba dresses and leather boxing gloves that dangled around their necks. For men, there were silver down-filled puffers, and gym shorts and muscle shirts with what appeared to be a black-on-black crocodile pattern, which, for a very brief instant, I could see even myself wearing at my local status-gymwear-loving Equinox, though definitely without the clear protective plastic face guard as shown (below).

Why It’s a Wow: To start, Jessica Chastain, Solange Knowles, Justin Theroux, Kate Mara, Mary J. Blige, Melissa George, Dakota Fanning, Eddie Redmayne and Diplo were there. And while it would have been hard to top Donatella Versace’s 2011 H&M party that included performances by Prince and Nicki Minaj, Wang’s show was followed by a concert by Missy Elliott (pictured, below). She wore a WANG-screaming baseball cap as she sang “Get Ur Freak On,” “Work It” and “Pass That Dutch,” songs that predate the current social-media-content-driven phenomenon of concerts where people don’t raise lighters in appreciation, but cell phones. Elliott, while perhaps amused by the prospect of singing to an audience of electronic devices, wasn’t having it.

“Did y’all come to be cute, or did you come to party?” she scolded.

They may have come to Instagram, but they stayed to party.

Learn More: Count the days until Nov. 6, when the Alexander Wang X H&M when the collection goes on sale in H&M stores, as well as online at hm.com (with some pieces available at alexanderwang.com). 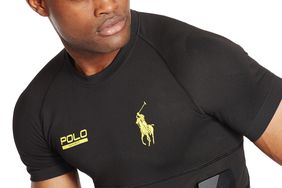