There’s probably only one man who could cause MTV to completely reschedule the Video Music Awards: President Barack Obama. In order to prevent airing the awards at the same time as his Democratic National Convention speech this Thursday, MTV has bumped the start up to 8 p.m. EDT, an hour before its original 9 p.m. slot. Obama’s speech is slated to start around 10 p.m. EDT on all the major networks. Performers expected to appear at this year’s VMAs include Rihanna, Demi Lovato, Taylor Swift, and P!nk. It’s a busy night for the U.S. of A!

Plus, see who's performing! 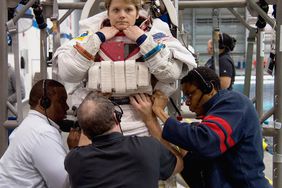 The All-Female Spacewalk That Wasn't