Virgil Abloh Designed a T-Shirt to Celebrate the New InStyle

For some, a T-shirt is just a piece of clothing. But for Virgil Abloh, it's the impetus behind his entire fashion career. The designer's first collections for his now-defunct streetwear label Pyrex Vision and Milan-based brand Off-White both featured tops emblazoned with graphics and numbers. The response was unprecedented, thanks in no small part to hype delivered by his good friend and frequent collaborator, Kanye West.

VIDEO: Cover Girl Emily Ratajkowski Tells Us What Is In Style -- And What's Not!

Now, Abloh is harking back to his early design days with an exclusive T-shirt for InStyle's new and improved March issue starring model and actress Emily Ratajkowski, who wears it on our cover. "The T-shirt has always been important to me in a fashion context," Abloh said recently by phone. "I've always wanted to design one that is coveted. My goal [as a designer] is to clash different worlds together. I often say, 'I want a brand that's in between Supreme and Céline.'"

Emily Ratajkowski Continues to Take Over Instagram, One Belfie at a Time
01 of 01
Buy Now

The T, designed in cahoots with our editor-in-chief Laura Brown, is made using Off-White's signature high-grade cotton, and features "IN" in '80s-style typeface across the front, and "STYLE" on the back. "Typography is everything," Abloh added. "I like to make things that are approachable, but I'm very particular about fabrics. I can assure you that it took years to find the cotton that we used." Virgil Abloh's T-shirt is now available for $120 at Off-White. 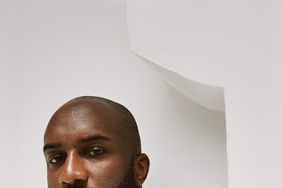