Viola Davis Compares the Aftermath of Sexual Harassment to a Tattoo

Since the Time's Up movement was sparked at the beginning of 2018, Hollywood actresses have slowly opened up about their own experiences of sexual harassment. While some women have focused on misconduct in the entertainment industry, others have gotten candid about sexual harassment throughout their lives. For Viola Davis, her own #MeToo story goes back further than you could imagine.

Davis was one of more than 300 Hollywood women who kick started the Time's Up initiative back in January, launching a social media movement, as well as a legal defense fund for women who have experienced sexual harassment, assault, or abuse in the workplace.

However, she only recently divulged her own experiences with sexual harassment, and they're not limited to her time in Hollywood.

She went on to tell a chilling story about the sheer number of men who made remarks toward her when she was simply waiting at a bus stop to pick up her niece: "I remember one day, when I was 27, waiting at the bus stop in Rhode Island for my niece to get out of pre-school. I was probably there 25 minutes, and I am not lying because I counted, 26 cars drove by with men in them who solicited me, harassed me, yelled at me, verbally abused me. Some of these men had baby seats in the back."

Viola Davis to Hollywood: If I’m a Black Meryl Streep, Then "Pay Me What I’m Worth"

Like so many women, Davis views these experiences as part of who she is today, equating them to a tattoo. She does note the silver lining of going through trying experiences like this, though: They allow her to feel empathy and compassion for the women who come forward with sexual harassment claims.

"It makes you feel like crap, it makes you feel like, what would a childhood be if that were removed?" she told the source. "And it’s hard to separate that stain from who you are. You tattoo it on yourself. Those personal experiences have allowed me to feel compassion for the women who have spoken up."

Despite the recent swell of sexual misconduct claims coming out of Hollywood, Davis noted that black women still struggle to make their voices heard: "There are plenty of black women who have come forward. I don’t think people feel we deserve the same empathy. Or investment. We are not as valued. If the story wasn’t coming out of Hollywood, and the predator wasn’t someone like [Harvey] Weinstein, I don’t think it would have gotten the spotlight [either].” 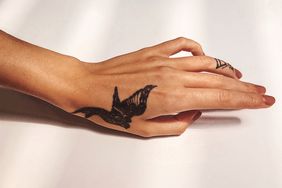