As stars trickled out of the Dolby Theater in Los Angeles, they made time for a quick outfit change and even switched up their hair and makeup. The Vanity Fair after party looks did not disappoint. Joining Oscar winners like Lady Gaga and Regina King, were Jennifer Lopez's violet eyeliner and Kerry Washington's freshly cut pixie.

The stars' standout looks also forecasted some future big beauty trends, too. If this after party is any indication, sleek, straight hair is the new beachy waves, and pink is the next eye makeup color to try.

Here, all of the must-see hair and makeup looks from the 2019 Vanity Fair Oscars after party.

Leave it to makeup artist Hung Vanngo to convince us to wear blue eyeshadow. He gave model Taylor Hill the most killer cobalt smoky eye we've ever seen. Hairstylist Danilo rounded out the Charlie Chaplain-inspired look with styling her hair in '20s French twists.

Instead of trendy sparkly hair clips, Lily Collins added some fresh flowers to her straight, center-parted hair. As for her makeup, she kept things simple with groomed brows and soft burgundy eyeshadow.

The star channeled your early 2000s prom hairstyle with her messy bun and face-framing tendrils. Her makeup look was made up of a bronze smoky eye and nude lip gloss.

Kendall Jenner's high slit dress may have stole the show, but her after party beauty look deserves a moment, too. Case in point: Her voluminous lob and clean cat-flick eyeliner.

Chrissy Teigen wore the soft waves of your dreams to the 2019 Vanity Fair Oscars after party. For her makeup, she went with a warm smoky eye and nude glossy lip.

J. Lo added a unexpected pop of color to her signature glow by lining her lower waterline with purple liner. Her hair was styled

Red eye makeup can be easy and subtle to wear. Case in point: Nina Dobrev's burgundy eyeliner. As for her hair, the actress wore a sleek and elegant updo.

The actress' soft waves and tightline eyeliner is a hair and makeup comb you're going to want to screenshot — and attempt to replicate. Moretz's hairstylist Gregory Russell gave her waves their fluffy finish by sprayed them with IGK's Beach Club Texture Spray.

The singer brought her signature loose messy waves and perfect cat-eye eyeliner to the Oscars after party.

Priyanka Chopra brought another version of the early aughts messy updo to the Vanity Fair Oscars after party. The look, styled by Renato Campora, was created using Matrix products, including the Style Link Texture Builder Messy Finish Spray to give the updo its undone texture.

She wore hers with sparkly silver eye makeup and glossy berry lips. The exact products her makeup artist Patt Dubruff used on her lips: Jill Stuart Beauty's Dressed Rouge in 04 and Lip Blossom in 46.

Although Kacey Musgraves is a huge fan of the center part, she's down to switch things up from time to time. That's exactly what she did for her Oscars after party hairstyle by wearing her hair in a deep side part. For her makeup, she went with allover bronze including a shimmery eyeshadow and nude lipstick.

The major hair changes didn't stop at the Oscars red carpet. Kerry Washington debuted a super-shiny, choppy, pixie cut at the Vanity Fair after party. Her hairstylist Takisha Sturdivant-Drew ran Matrix's Total Results Keep Me Vivid Color Velvetizer through her hair before and after using a flat iron to give it that extra glossiness.

The actress is proof that sometimes all it takes is a matte red lip to make it onto the best red carpet beauty lists. She kept her hair classic, too, by styling it straight with a deep side part.

The Big Little Lies star's hairstylist Nikki Nelms puled her braids up into a French twist. Kravitz proved that the monochromatic makeup trend is alive and well with her matching peach eyeshadow and lips.

The star's new pixie cut is so good, it might convince us to go short. But, we couldn't take our eyes off of her flawless, glowing skin. Makeup artist Fiona Stiles created her perfect base using Koh Gen Do products.

Redken brand ambassador Chad Wood wanted to compliment the highline of Hudgens's gold dress by giving her a low ponytail. For added volume, he sprayed her roots with Redken's Guts 10 Volumizing Spray Mousse before pulling it up.

"Taraji's 2019 Vanity Fair Oscars Party hair was inspired by Donna Summers," said celebrity hairstylist Tym Wallace. He used Dyson's Supersonic Hair Dryer Professional Edition and a curling iron to dry and wave her hair. Next, he "sectioned the hair off by brushing it out into a wavy afro, paying homage to the late world-renowned singer." The actress kept the '70s vibe going with eyeshadow that's just as shimmery as a disco ball. 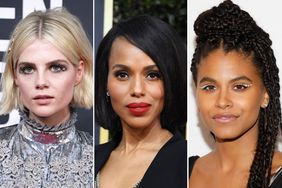 10 Easy Makeup Looks to Get You Through the Holiday Season