The absolute serve of the year.

What do you do after news of your reported breakup has been broadcast to the world?

If you're Vanessa Hudgens, you stunt on the red carpet like it's your job (because it's also part of your job). On Tuesday night, Hudgens stepped out at the premiere of Bad Boys For Life, following news that she and longtime boyfriend Austin Butler had split up.

Suffice to say, if the news is true, she doesn't look too broken up about it.

She — and we cannot stress this enough — wore the hell out of a feathered Georges Hobeika gown with a high split on the side, paired with black Casadei sandals and some choice poses that go toe-to-toe with the dramatics of the dress.

Is there a more iconic post-breakup appearance?

On Tuesday, it was reported that Hudgens and Butler broke up after eight years together."Vanessa and Austin are officially broken up, and Vanessa has been telling those close to her about their breakup," a source confirmed to People.

Hudgens appeared not to have addressed the breakup during her public appearance, but her red carpet poses really do speak for themselves. 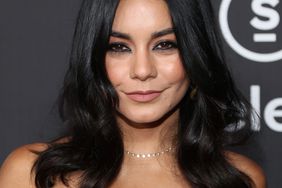