Some celebrate 20 years with cake and candles—last night InStyle overtook the Paramount Hotel's Diamond Horseshoe theater, the bedazzled midtown Manhattan venue for Queen of the Night, and threw a 20th anniversary party that reigned supreme.

"Oh my god, this place is everything," said Jennifer Hudson who navigated the dimly lit room in eight-inch Versus stilettos as guests including Bella Thorne, Diane Kruger, and Jennifer Morrison mingled. "I haven't been able to stop taking pictures since the moment I walked in."

Orange Is the New Black’s Laverne Cox arrived arm-in-arm with designer Marc Bouwer (who also dressed her for this year's Emmy awards). "InStyle has always been the place for celebrity and high fashion," she told us. "It's always had a way of teaching me and keeping me ahead of the fashion game," said her co-star Danielle Brooks.

As specialty cocktails like The Roaring 20 (a ginger and sage infused bourbon) circulated the event, which was sponsored by Maybelline and Garnier, Editor Ariel Foxman (pictured at top with Kruger) and Publisher Karin Tracy took center stage. "Without all of your support, InStyle would not be where it is today," he said just before music-duo Nico & Vinz performed for the 500-person crowd. "Two decades later [we are] the No. 1 women’s fashion magazine in the United States."

Though the soiree took place on a Monday night, Padma Lakshmi, Jess Weixler, and Jaime Chung lingered as the clock neared midnight. Much like this evening, said Weixler, "reading the magazine has always felt like you're just hanging out with your girlfriends." 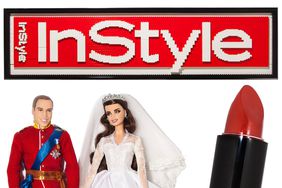