Whether we're looking to catch up on the latest news or express our opinion on a much-debated topic, Twitter continues to be the platform that many around the world turn to time and time again. And 2015 had no shortage of big moments on the site, although there were a few that stood out amongst the rest.

So what were the most buzzed about tweets of 2015? President Barack Obama's tweet expressing support of marriage equality after the Supreme Court's ruling to legalize gay marriage on June 26 had the most interaction of any other Tweet sent in the year, garnering 448,185 retweets and 432,493 favorites.

A few other 140-character snippets that received their fair share of retweets and favorites included Leonard Nemoy's final tweet before he passed away, Caitlyn Jenner's first tweet, Lady Gaga's announcement that she would star in the new season of American Horror Story, Adele's note to fans about her new album 25, and Taylor Swift weighing in on The Dress.

And in case you were curious as to who has the most followers on the platform, singer Katy Perry reigns supreme with 78.3 million, followed by Justin Bieber, Swift, Obama, and Rihanna. 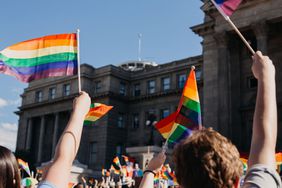