His public declaration of love comes three months after the pair split.

It has been three months since Kylie Jenner and Travis Scott split, but no matter what happens between them on a romantic level, the rapper admits will always have a place in his heart for the makeup mogul.

In a new interview with XXL magazine, Scott opened up about being Stormi's dad, his feelings for her mom, and what may have contributed to the ending of his and Kylie's relationship.

"Being a dad is better than what I thought it would be," Travis told the outlet about fatherhood. "Stormi is one of the best human beings I know. She’s like my best friend. She makes life a little bit easier. She just inspires me and she surprises me every day with how she’s thinking. It’s so crazy."

Travis then sweetly mentions Kylie during the conversation, adding: "Her mom and I came up with the name Stormi together. I love her mommy and I always will.” However, it appears the couple's very public romance took a toll on him. "The hard part about relationships is just trying to be in one without a million outside voices interfering," Scott continued.

Despite no plans for an immediate reconciliation, Kylie and Travis spent the holidays together for Stormi's sake, according to E! News.

"Regardless of what their relationship status is, there's no doubt they will all be together for Christmas," one source explained to the outlet. "They are a family and that hasn't changed. It's very important to Kylie and Travis that Stormi has both of her parents there. They are making memories with her that they hope will last forever."

By the looks of Kylie's Instagram grid — mission accomplished. 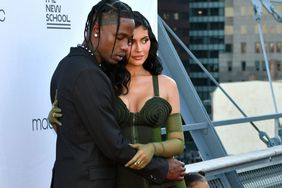