You know Tracee Ellis Ross, actress and fashion superstar, and of course you know Diana Ross, the iconic super diva/living legend among us, and perhaps you even knew that they were one of Hollywood's most successful mother-daughter duos. (Real talk, that resemblance is the definition of uncanny.)

But did you know that there are more family branches, and that those branches extend as far as the Simpson sisters? Yes, Ashlee and Jessica are also part of the fam.

At Sunday night's Grammy Awards, however, where Diana was honored on her 75th birthday, all eyes were on her 9-year-old grandson Raif-Henok Emmanuel Kendrick. The fourth grader had the honor of introducing his grandma, and the world was instantly charmed.

And there's more where that came from. Here's a run down of every other branch of the family tree:

First things first, an ode to the supreme matriarch: Diana. The singer, actress and producer extraordinaire is the former leading lady of the hottest girl groups in Motown (and history), the Supremes. After leaving the group in 1970, she launched a solo career with hits such as "Ain't No Mountain High Enough," which you may have heard just once or twice. She has released 24 (!) studio albums and was inducted into the Rock and Roll Hall of Fame in 1988. Though the 12-time Grammy-nominated songstress never took home the top prize, she was awarded a lifetime achievement award in 2012.

When she wasn't busy churning out the hits, she had a bit of time for romance. She became involved with Motown CEO Berry Gordy in 1965, and became pregnant with her first child, Rhonda Suzanne Silberstein in 1971; however, 2 months into her pregnancy she married Robert Ellis Silberstein. Rhonda is mother to Raif.

The couple went on to have two more daughters, Tracee (the aforementioned actress) and Chudney (an author), each of whom caught the entertainment bug like their older sister, who pursued music. Diana and Robert divorced in 1977.

Diana wed her second husband, a Norwegian shipping magnate named Arne Næss Jr., in 1986 after dating for a year. The couple had two sons together: Ross and Evan. Næss and Diana divorced in 2000.

So where, you might ask, do the Simpsons come into play? Well, Diana's youngest, 30-year-old Evan, is married to Ashlee Simpson, meaning that technically, she's Diana's daughter-in-law. Evan and Ashlee recently debuted both a record together and a new reality show on E! called (fittingly), Ashlee + Evan.

Ross has 5 grandbabies, making for quite the photo opp:

We can only imagine family reunions at the Ross household (does Jess and her fam get an invite, too? We need answers!). 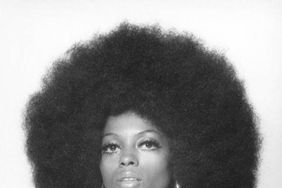