Head To Oblivion with Tom Cruise, Plus More of the Weekend's Parties!

Tom Cruise continued his world tour in support of his latest film Oblivion this weekend, making a stop in Moscow, Russia alongside co-star Olga Kurylenko (in Stella McCartney). The movie, which opens in the U.S. April 19, puts Cruise in another futuristic action-packed role as Jack Harper, as he is heads out on a mission impossible to an abandoned Planet Earth to extract any remaining resources. But once there, he discovers the world isn't quite as abandoned as everyone assumed. Watch the thrilling trailer here.

Plus, see more of the weekend's star-studded parties in the gallery! 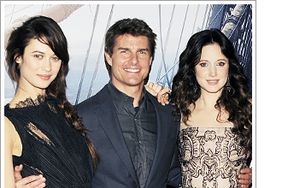