Actress Tilda Swinton's androgynous style, platinum hair, and pale skin have become her personal trademarks, but on-screen, she is Hollywood's most committed chameleon.

Most recently, the star stunned audiences as the tanned, toned, and utterly ruthless men's magazine editor Dianna in Trainwreck, alongside Amy Schumer. Completely disappearing in the role, Swinton adopted the wavy bob and smoky-eyed look of her character. The film's costume team even outfitted her in sleek dresses by Victoria Beckham, who served as inspiration for her look. But this isn't the first time she has surprised us.

It was only last year that the 54-year-old actress went the other direction, transforming into 83-year-old heiress Madame D for Wes Anderson's The Grand Budapest Hotel. Wearing 11 prosthetic pieces to age her, Swinton's role helped the film score an Oscar for best achievement in makeup and hair styling.

Immerse Yourself in The World Of The Grand Budapest Hotel

Alhough her part as Mason, the dystopian tyrant in the 2013 drama Snowpiercer, was actually written for a man, Swinton worked with director Bong Joon-ho to embody the role. Colored contacts, glasses, a wig, a fake nose and teeth round out her wicked costume.

In 2012, the actress went back to the '60s for Moonrise Kingdom. Her character, Social Services, oozed authority in a buttoned-up blue suit and pillbox hat that topped her fiery red hair.

Swinton's altered appearance in The Limits of Control (2009) was reason enough to see the crime drama. She owned her part as The Blonde in a cowboy hat and boots, and a trench.

Don't be fooled by her ethereal beauty and pristine fur cloaks. Stepping into the shoes of the White Witch in The Chronicles of Narnia: The Lion, the Witch, and The Wardrobe, Swinton was the ultimate baddie.

Even early on in her career, she took on daring characters. In Orlando (1992), based on the Virginia Wolfe novel, Swinton played the title role, as a man who transforms into a woman overnight. 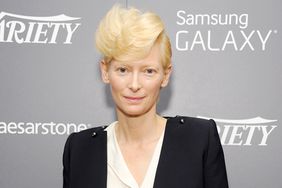 Pump Up Your Pixie with Tilda Swinton's Gravity-Defying Hairstyle 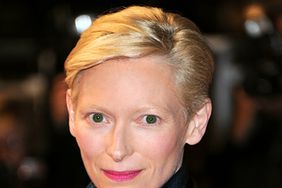 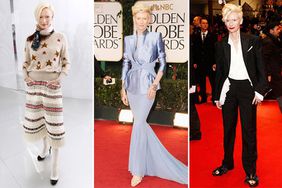 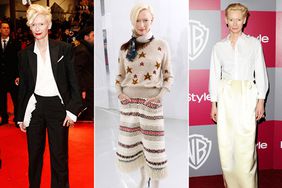 Happy Birthday, Tilda Swinton! We Can't Get Enough of Your Unique Style