How They Met: In 1972, then-14-year-old Griffith met Johnson, who was 22 at the time, on the set of their movie, The Harrad Experiment — which her mother, Tippi Hedren, also starred in.

"We were in the stairwell of this Anheuser-Busch Estate waiting for a setup," Johnson recalled. "We started chitchatting."

Griffith added, "I thought he was the most beautiful person I'd ever seen."

Hedren, who by then was an acting legend, recalled feeling "sheer panic" that her teen daughter had fallen for an older man. "How do you handle that? There was a very strong attachment between the two of them," she said.

Johnson and Griffith moved in together when she was 15 and got engaged on her 18th birthday, tying the knot in 1976. On the evening before the wedding, “I had been with [ex-Miss World] Marjorie Wallace most of the night,” Johnson later admitted. "Melanie called at about 4 or 5 in the morning. We professed undying love and flew to Las Vegas and got married."

TBT: Helen Mirren Said It Was Difficult for Then-Boyfriend Liam Neeson "to Be Under My Shadow"

The marriage (well, the first one — but more on that later) lasted only six months, and after the divorce, Griffith went on to date actor Ryan O'Neal and marry her She's in the Army Now co-star Steven Baur, with whom she split in 1989. She and Baur had one son together, Alexander Griffith Bauer. Johnson, meanwhile, dated actress Patti D’Arbanville, with whom he had a son, Jesse Johnson.

Why We Loved Them: After some time apart, Griffith and Johnson found their way back to each other — and gave marriage another shot.

In June 1989, they remarried in an intimate ceremony at their ranch in Aspen, with their sons from their respective previous marriages serving as ring-bearers. At the time, security at the nuptials said fans were discovered crawling up the irrigation ditch leading from an adjoining ranch onto the land to get a glimpse at the actors.

"There was always this connection. I can’t explain it," the Working Girl star said when they reunited. "It’s almost like soulmates, and it always was. I didn’t want it to be like that sometimes, and sometimes I wanted not to love him. But maybe it was karma, and you have to go through all that to get to where we are now. Now it’s different. It’s like it was in the very beginning, but there is so much more.”

When They Peaked: Things may have been tumultuous for the two — both battled alcohol addiction at different points — but that second chance at their relationship seemed like their golden years together.

“I wish it was tomorrow," Griffith said ahead of their second wedding. "He’s wonderful [...] I believe some relationships are fated, and ours was probably one of them. I’ll always love him. He was my first love.”

Plus, it was during their reunion that daughter Dakota was born — Johnson was elated at the news that Griffith was pregnant, telling Hedren at the time, "This is God’s plan."

Dakota, of course, went on to become a star in her own right after breaking out in Fifty Shades of Grey, and even gave her parents a nod in her Saturday Night Live opening monologue.

The Breakup: Sadly, their second union wasn't meant to be. They divorced again after five years together in 1994, citing irreconcilable differences.

"It is hard for me to imagine life without him. But we are changing in different ways." Griffith said at the time. Though they remained separated, the two have remained close — in a 2017 interview, Johnson said there "still is" a strong bond between the two of them.

“It’s pretty simple: when you love your children and want to share your life with them, it’s foolish to denigrate or have any animosity with their mother," the Miami Vice star told Stellar magazine earlier this year. "Children model you more than they listen to you."

Griffith once told InStyle, "All of my husbands, my three husbands — I love them all so much, and we’re all very close."

Where They Are Now: After her 1994 divorce from Johnson, Griffith began dating actor Antonio Banderas, who she married in 1996. They had one daughter, Stella Banderas, 23. Though they divorced in 2015, both have remained on great terms, and Banderas recently called her "one of my best friends" (seriously, Griffith needs to teach a class on staying friends with your ex).

After their divorce, Griffith has said she doesn't think marriage is "relevant" anymore, and that you won't be seeing her on dating apps anytime soon.

"But especially if you’re 60 and you have four kids and you’re living the life you’ve always wanted," she said. "Then why get married? It’s, like, I would love to fall in love and have a romance, a relationship, but I haven’t. I keep looking. I’ve had a couple of lovers but not a relationship."

Griffith most recently starred in The Disaster Artist, and had a guest spot in the Showtime series SMILF. She can next be seen in Akil, a movie written and directed by Banderas.

Johnson married Kelly Phleger, a teacher, in 1999, and the two have three children together.

"I had a rare moment of clarity and asked this woman to marry me, and I still think that she’s under a spell," he said in a 2014 interview. "And so I beg of you not to snap your fingers, because God knows what will happen if she ever comes to."

Johnson is currently starring in HBO's Watchmen, and can next be seen in Knives Out. 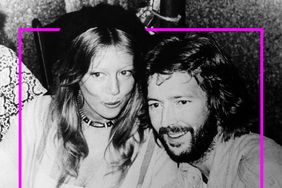